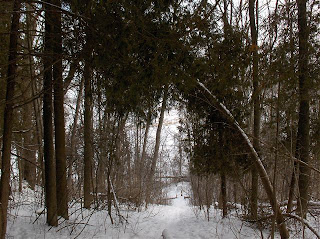 Source: Webster's Revised Unabridged Dictionary (1913) In the 1913 version of Webster's Dictionary, the meaning of tracking was very simple and not to be confused with current definitions of the word which may include...

1. The placing of students in any of several courses of study according to ability, achievement, or needs. Also called ability grouping.
2. A control mechanism that adjusts that lateral pressure of a phonograph needle as it tracks in a groove.
3. A control mechanism that adjusts the position of a magnetic tape as it moves across magnetic heads, as in a VCR.
4. T. software for inventory controlThis week I walked on a trail that runs between two streets close to the hospital. This is a typical suburban neighbourhood on the edge of the city. In places, the trail descends steeply through a mixed forest to the river's edge.The snow was a few inches deep and it was easy to see the tracks of people who had passed by with their dogs. I was surprised to come across some fresh deer droppings and started to look for signs of other creatures in the snow. The deer tracks were clear and I started to follow them through the bush. The leafless trees and white forest floor should have made a deer stand out easily. I spotted several other animal tracks and became totally engrossed in my quest to find some animal besides a squirrel. I likely sounded like a monster tramping through the snow, snapping branches with my feet and arms. Needless to say, I had to turn around and return to work without a sighting.

My brief tracking pursuit (as per Webster's 1913 definition) reminded me of a book I have called The Sparrow's Fall. The author, Fred Bodsworth was a Canadian writer and naturalist from Port Burwell, Ontario. In this story, he wrote about a native Canadian, Jacob Atook, and his battle against starvation in the snowbound area of the Hudson Bay lowlands. Jacob was a poor hunter, but had to provide for himself and his pregnant wife. The book is beautifully written and deals with the connection between death and life and the basic urges of love and survival. Jacob finally tracks and kills a caribou and and is able to provide for his family.
I wanted to capture a deer with my camera lens and my failure to do so was not a matter of life and death. But it gave me a small idea of the skill and persistence needed in a hunter-gatherer society for obtaining essential nourishment.
How many of the animal tracks can you identify? My next trip to the library will be to get a guide book about animal tracks in the snow so I can identify more than three of these myself.