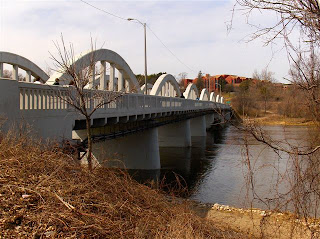 This is a view of our hospital from the river trail I frequently follow. I love the arches of this bridge and have photographed them many times as they span the water. In its history as a tuberculosis sanatorium and chronic care facility, the hospital was home to many patients for extended periods of time. In the early decades of the 20th century, people travelled by electric rail to the facility on the rail line that is now used for freight trains.
We have a number dedicated volunteers who give their time to our patients each week, time that regular staff are unable to provide for recreational activities and friendly visits. 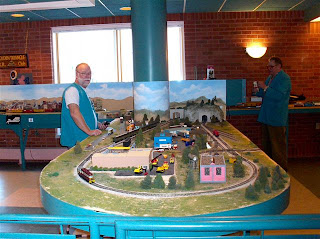 In the elevator lobby of one of the floors, a large model railway is set up. A few volunteer enthusiasts run the trains every Wednesday. Four separately run miniature trains lines operate between local communities, each represented with replicas of stations, factories, bridges and landscapes that are familiar to our residents. At lunch time today, I stopped by for a visit and was given a detailed tour of the set. 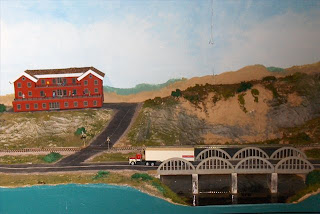 Here is the bridge over the river and on the hill is a model of the original hospital built around the time of the First World War. As I was taking this picture, the gentleman in charge wanted to show me how the signal lights worked when the train passed by. He reversed the train that had recently travelled the track and made sure I took another shot. The little signal lights and warning bells were activated as promised. 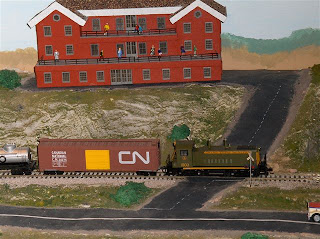 Many hours of work have been put into this model over the years, but I was told that the trains would likely be stopping in the near future. The engines were getting old and the local shops that carried model trains and accessories had all closed up. Younger people have little passion for this type of hobby as rail travel has lost the romance and appeal it had in years gone by. Personal vehicles, buses, airplanes and transport trucks have replaced the essential role that railways had in North American history. Only one small passenger train passes through our local station each morning en route to Toronto. CN Railway just ended a strike that lasted for two weeks. Most of us would never have noticed except that it exacerbated a fuel shortage at our gas pumps caused by a fire at a local oil refinery.
Perhaps there are some younger volunteers somewhere who will keep the trains running a while longer, updating and repairing the sets and reminding us of a time when the railways were what kept our country connected and moving.
Posted by Ruth at 9:02 pm