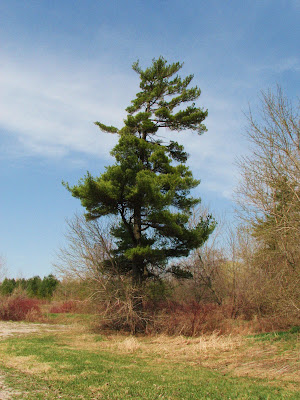 In Ginger's comment yesterday she said, "Looks like there are a lot of browns in nature at this time of year." I agree that the last post reflected a brown state of affairs, but after two days of well above normal temperatures, colour is showing up everywhere.

Yesterday my husband took me to the Guelph Lake Conservation Area. The site doesn't open until next weekend for campers but it was easy to enter for a walk on the trails. The Speed River was dammed in this spot after the big flood of 1974 which I wrote about here. Guelph Lake is a reservoir for the Grand River watershed and along with a few other reservoirs has prevented bad flooding from occurring again. I remember when it was built and watched a large tract of farms and roadways become submerged under the water. For a while it was an eyesore as telephone and hydro poles stuck out of the water. But the area is naturalized now and is wonderful nature centre. 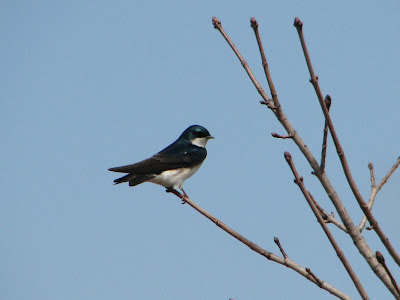 There are hundreds of nesting boxes up and Tree Swallows swooped and perched on the bare trees along the walkways. Blue was a predominant colour as these were the most common birds to be seen. 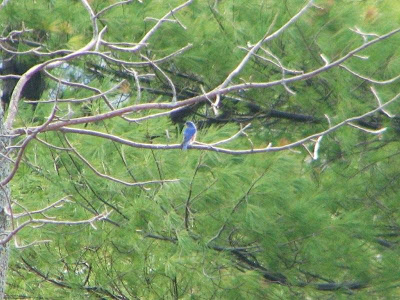 And talking about blue...I saw my first Eastern Bluebird ever!!! The picture is distant but we watched this lovely, colourful bird through binoculars for several minutes. It obviously had not been raised with help from Jayne or Mary as it was very shy. 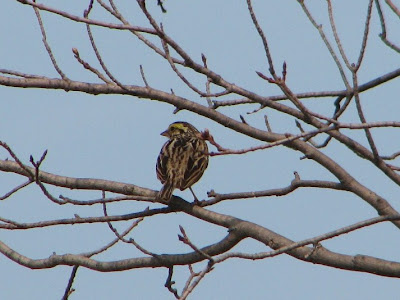 This Savannah Sparrow buzzed from a low shrub. While it is predominantly brown it has a distinctive yellow eyebrow that stood out clearly. 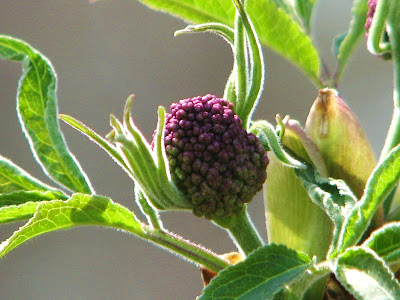 The leaves on the trees and shrubs could be observed opening by the hour and this willow-like bush had purple blooms emerging as well. I don't know what is is, but will endeavour to find out.

This lake has no cottages and motorized watercraft are not allowed. I hope the opening of the park does not scare away the many birds. We watched a pair of nesting Osprey, listened and watched an Eastern Meadowlark sing, saw Phoebes, Blue Jays, Finches and Robins. In one low tree there were four perched birds...a Robin, Goldfinch, Bluebird and Tree Swallow.

And that was a beautiful blend of colour.