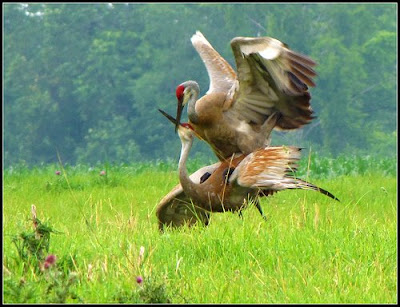 I have several bird books, from a 1947 edition of Peterson's "A Field Guide to the Birds" to a 2006 edition of "Sibley Guide to the Birds". The distribution of a number of bird species has changed significantly in the sixty years between the publishing of these two books. In a few more years, changes will have to be made again. 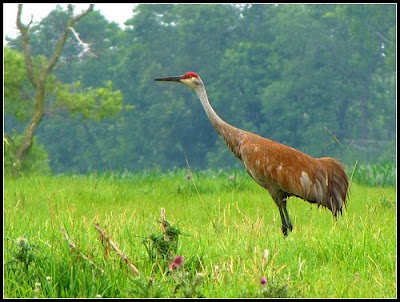 In the past couple of years, there have been reports of breeding Sandhill Cranes in our region within a thirty minute drive from our home. My husband and I found a pair earlier this month and I returned today to check them out again. We have seen many Sandhill Cranes on Manitoulin Island but it is difficult to approach them so most of my photos have been taken from quite a distance. 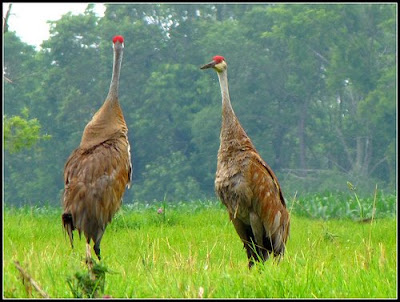 This pair stood close to the country road as they were feeding in a farmer's field. I don't know why they were engaging in mating behaviour as nesting season should be over. The eggs need a month to incubate and the young birds or colts do not fledge until they are 65 to 75 days old. I was able to watch these two birds dance together, something I expected to see only if I travelled to Manitoulin Island in April or early May.

The Sandhill Crane does not breed until it is two to seven years old. Mated pairs stay together year round, and migrate as a group with their offspring. If these birds find this area satisfactory for breeding, their numbers will undoubtedly increase each year if their offspring return with them. And the bird guides will be re-written...

Here is a link with more information on Sandhill Cranes.
Posted by Ruth at 8:18 pm