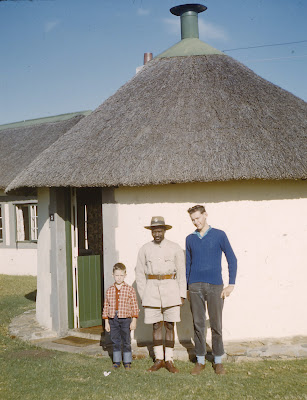 Blogger Gaelyn of Geogypsy is visiting South Africa this month and I have followed her posts with interest. She did a 30 km hike of the Drakensburgs, visited Kruger National Park, learned to drive on the left side of the road, and is continuing her adventures for another week. I am pretty sure I have been to Kruger as well, but I only remember going to Hluhluwe National Park in Zululand. (pronounced Shou-shloo-ee) We stayed in thatched-roofed cottages and during the day viewed wildlife from the safety of our car. I remember how cold it was at night and that Grandma, (who visited us for six months in 1960), would put a hot water bottle in the bed to warm it for us. Dad taking a picture of rhinos

Besides the pictures he took, Dad also took home movies and my memories of the game parks are more from seeing the action from his 8 mm projector as we were growing up. He has given each of us a DVD conversion of these films but I don't know how to upload them in a digital file. One memorable clip was taken as he approached a cranky White Rhinoceros at the side of the road. These large animals can move quickly and Dad had to run back to safety of the car with his movie camera still running. As children we always knew the story had a good ending, but we liked to see the blur of ground as he ran away from the charging rhino. 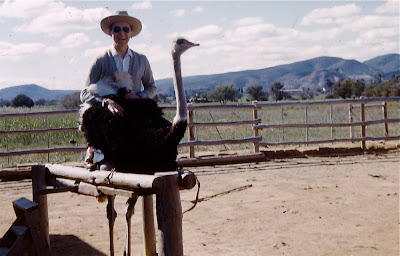 Dad on an Ostrich

I wasn't along on the trip when Dad rode an ostrich, but the action is also captured in the old movies. He was about 28 years old when the pictures in this post were taken.

The term 'Big Five' refers to five of Africa's greatest wild animals;- the lion, leopard, elephant, buffalo and rhinoceros. I don't remember seeing a leopard but have seen the others. I think I was most impressed with giraffes and antelope though.

The big five were widely hunted in the past and are now vulnerable due to poaching and loss of habitat. If I were to return to South Africa for a visit, I would be more impressed with the animals on the game reserves. Isn't it odd that I remember the long car trip to get there, the cottages, beds and tea rooms the most?
Posted by Ruth at 7:27 am