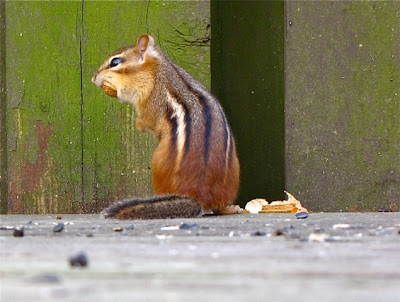 Redpants
Nature has its hoarders and one of them takes daily advantage of my generosity. I nicknamed this particular bold chipmunk “Redpants” as his hindquarters are exceptionally gingery. As long as there is food on our deck, he is there stuffing his cheeks and then running away to store it in his home. I have watched him empty a bird feeder filled with sunflower seeds with singular purpose and surprising speed.

I visited several homes over the years where hoarding was a significant mental health issue. The worst place I visited was piled ceiling-high with boxes, newspapers and magazines and there was only one narrow pathway through the mess in the entire apartment. There was no place to sit, cook or take a bath. The smell was atrocious and the rooms were infested with vermin. The lady had been sent home from hospital after breaking her hip and I was the first Home Care worker to visit her. It was impossible to provide care for her in that environment and I had to report her to the local fire and health department. Unfortunately, I had a new employee with me that day for orientation and she was so distressed by the visit that she quit her new job. 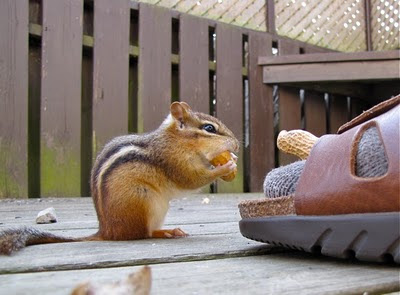 I have seen patients from Europe who were displaced and survived concentration camps during World War 2. Another lady, who lived alone, had two freezers full of food and enough bottled water around for at least half a year. She had never thrown out any clothing for decades and while her place was clean and organized, she was very anxious about her possessions and the possibility of having nothing again. 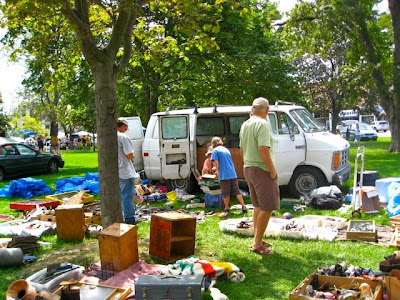 At this point of my life I have accumulated more things than I can keep track of. We have household items from our parents and grandparents which have sentimental value but are seldom used. I doubt I could make a list of half the things in our home and would not miss them if they were gone. Melissa of Empress of Dirt has been doing a series on “simplicity” and describes her successful efforts to organize her life. Her fifth post was very inspiring and has me thinking of ways to make some needed changes.

No, I have not watched Hoarders on A&E and I don't want to look at a mess I didn’t create. If I had time, I could buy a table at a flea market and peddle my discards to other hoarders for a few dollars. But writing this post is strengthening my resolve to put aside sentimentality and "what if I need it" thinking and simplify my life.
Posted by Ruth at 12:04 am