I took one of my elderly patients to the front entrance of the hospital for a ride to an appointment by wheelchair taxi. She waited for me without a jacket or hat thinking the weather was as warm as what we experienced on the weekend. Today's bright sunshine was deceiving as a strong, cold wind blew from the north. In the past week we have had snow, rain, thunder and lightning, hail, and temperature variations of 20 C.


We walked through a local conservation area on Sunday afternoon. It was short-sleeve warm yet the lake was still frozen over. This is the time of year to see nesting Bluebirds and Tree Swallows, yet things were very quiet, perhaps because the weather was very unsettled. My husband has a good eye for bird movement and he noticed this Eastern Phoebe taking short flights from an old apple tree in pursuit of emerging flying insects.


A short distance away, Savannah Sparrows were flitting about in a ditch and an Eastern Meadowlark sang from a distant tree. A loud Northern Flicker flew by and a few Tree Swallows circled overhead along with a kettle of Turkey Vultures.

The water along the edge of the lake was open and a few Common Mergansers with a Trumpeter Swan swam beside Canada Geese and Mallards. But I wanted to see Eastern Bluebirds, a species that is generally elusive in our area. 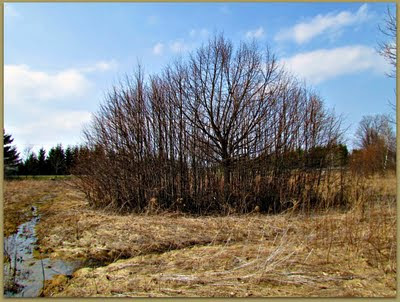 This tree is completely surrounded by suckers growing up from the boggy soil. The habitat is ideal for many small birds and I caught sight of one Bluebird in the area. It flew off as I tried to get closer but we found it again along the roadway. What a lovely bird!

My 2011 spring count is off to a slower start than last year, but the birds will soon arrive faster than I can count them.