St. Nicholas visited Kitchener's Christkindl Market this past weekend. When I asked to take his picture, he quickly found his wife and they posed together. St. Nicholas day is December 6th and many children in Europe put their shoes outside the door in the days leading up to tonight in hopes of receiving a special treat. Naughty children could expect a lump of coal or a tree branch. (The St. Nicholas above has several branches in his hand.) 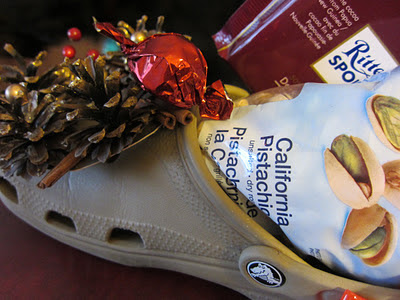 I looked at my footwear and decided there was nothing suitable for storing things I would later eat. Then I cleaned one Croc with a disinfectant wipe and checked to see what might fit in it. My size nine shoe held (with difficulty) one clementine, a small package of pistachios and one chocolate bar. No wonder St. Nicholas has such a small bag. The real St. Nicholas gained a reputation for gift-giving by putting coins in other people's shoes. Perhaps coins are a better idea than food or small toys. 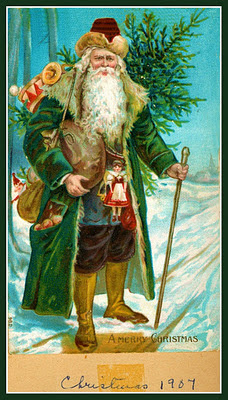 I shared the picture of this card from Grandma's Christmas scrapbook a couple of years ago. In 1907 St. Nicholas was evolving into Santa Claus in North America with a more colourful costume and bigger presents. He certainly is very fit as he appears to be walking to deliver gifts rather than riding through the sky in a sleigh.

It is interesting to learn about Christmas traditions in other countries. St. Nicholas and related (caucasian) benevolent gift givers are not celebrated everywhere in the world. I like this quote from Dick Gregory, a black American comedian and social activist.


"I never believed in Santa Claus because I knew
no white dude would come into my neighborhood after dark."

To those who believe...


HaPpY Saint Nicholas Day!
Posted by Ruth at 6:40 am

Email ThisBlogThis!Share to TwitterShare to FacebookShare to Pinterest
Labels: Christmas