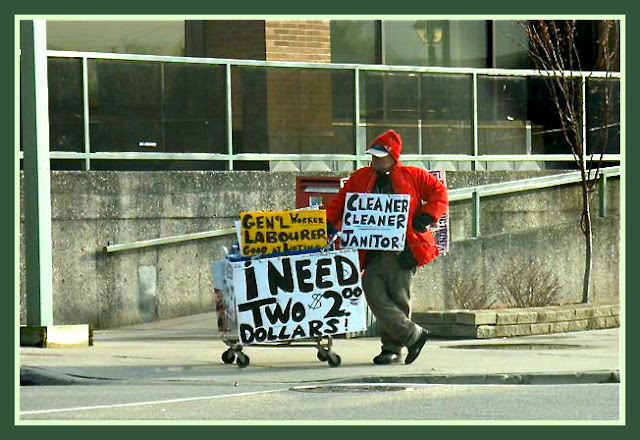 For Lent I thought I would try to live on the budget a poor person in our area would get on social assistance or a minimum wage job.

I also thought of taking the bus to work instead of driving.

Who am I fooling? How can I pretend to be poor? The arrogance of my assumption that I could make the money stretch, that I could tell others how to budget, makes me cringe.

I walk toward the community centre with a big pot of soup and a container of muffins. A line which already stretches along the front of the building moves a little to allow me room to go in the door. They have to wait outside as I enter.

I am rich, they are poor.

Even when I say hello, there is no eye contact, no real connection on a personal level.

She is first in line and drives her power wheelchair to the counter for the free meal. She cannot stand or walk. I wonder how she could prepare food at home, how she would reach the stove. Maybe she lives in a rented room without a kitchen.

A young woman sits cross-legged outside the dollar store with a cup in front of her. I stop and ask her name.

Her eyes are glazed and I wonder what she has taken, what pain she is covering up. I drop a coin in the cup and move on, not knowing what else to say.

Our church is having a potluck dinner in a couple of weeks and "each family is asked to bring two dishes", according to the announcement in the bulletin. I remember working in the kitchen a few years ago when a family brought a small dish of plain canned kidney beans and a bowl of jello to a potluck. We hid the food away and never served it. At the time I didn’t understand why someone would bring such a little bit of food.

There are those who feel excluded from our feasts because they have little or nothing to offer. They are often invisible as the rest of us share recipes and stories about our busy lives.

The poor are called many things... lazy, stupid, ugly, dirty. What does physical or mental disability, addiction, lack of education, a dysfunctional family, abuse, a criminal record, homelessness, hopelessness do to the soul? How can I know what that feels like? 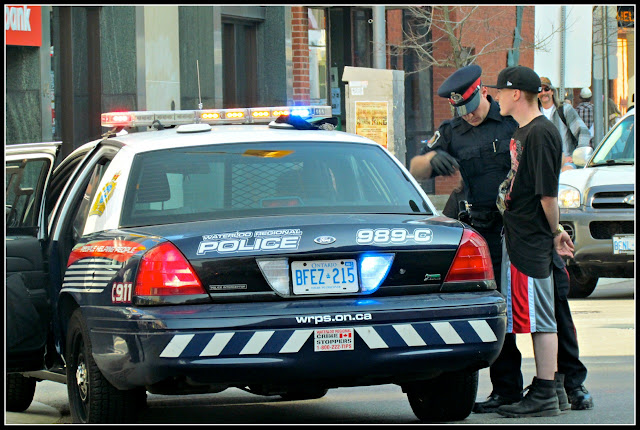 I have enough food in our house that I would not starve for 6 weeks even if I bought nothing else at the store. I have a good education, tools, a well-equipped home, social skills, family support, optimism and hope for the future. I paid $300 for new shoes and $60 for dog food this week. I cannot pretend to be poor.

Don’t be selfish; don’t try to impress others.
Be humble, thinking of others as better than yourselves.
Don’t look out only for your own interests, but take an interest in others, too.You must have the same attitude that Christ Jesus had.
Though he was God,he did not think of equality with Godas something to cling to.
Instead, he gave up his divine privileges ;he took the humble position of a slaveand was born as a human being.

When he appeared in human form,
he humbled himself in obedience to God
and died a criminal’s death on a cross.

Jesus became poor for the sake of mankind. He didn’t pretend, he really took the part from beginning to end. He told a rich young man to sell all he had and give it to the poor if he wanted spiritual treasure. That request was too much the young man and is still too hard for most people today.

How can I have the mind of Christ? Can I give up pride in my abilities, a judgmental attitude and feelings of superiority when I am around those who are less fortunate than myself? Will I be a genuine friend to them?

That is the harder sacrifice.
Posted by Ruth at 12:00 am