My Mothers' Day treat was spending the morning at Ruthven Park at the bird banding station. Spring migration is in full swing and I have had little time for birding in the past few weeks.  I saw many inspiring mothers.

Ruthven Park has a couple of graveyards. I sat on a bench by one of them to eat my lunch and noticed this tombstone erected in honour of a mother who was born the same day as me, but 129 years earlier. Her first name is similar to mine as well and she died on my mother's birthday, 55 years before Mom's birth. Almost 2 centuries after Eliza J. Rogers' started her journey on earth, we are reminded of the respect and affection her children had for their mother. 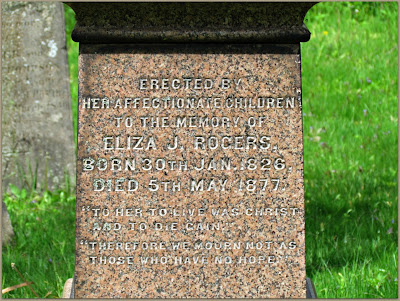 I had an unspoken wish for today, and that was to see a Scarlet Tanager for the first time. I left home before 5 AM and when I arrived at the park shortly after 6 AM, it was the first bird I spotted with my binoculars. When we did the first round of the mist nets, two beautiful males were caught together and I got to hold both of them!


Happy Mothers' Day to me, to my mother and mothers everywhere!