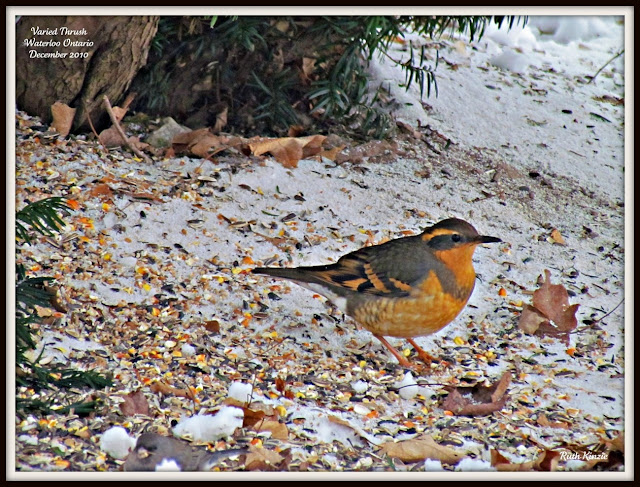 The Cornell Lab of Orthinology describes the Varied Thrush as "a large, robin-like thrush of the Pacific Northwest. The Varied Thrush is a characteristic bird of the mature, dark coniferous forests. Wandering individuals turn up regularly far from home, wintering around feeders in the midwestern states."

One of them wandered even further into south-western Ontario and is enjoying the hospitality of a generous family in our region. I drove to the property just outside the city after work. It is a haven for birds with several bird houses, feeders and many mature trees. This Varied Thrush is consistent in visiting a particular feeder under a juniper bush in the front yard. The  friendly hosts have invited birders to sit in their cars in the driveway where they have an excellent view of this rare, vagrant bird. And many people from all over the province have stopped by in the past two to three weeks. It was dull day and a fine snowfall obscured the mid-afternoon light, but I was able to get a few pictures for the record of this beautiful bird. 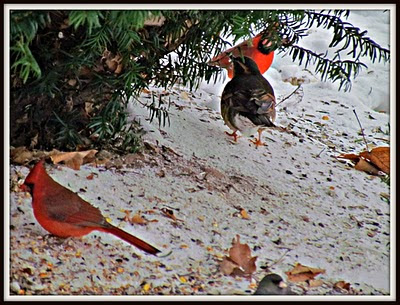 The Varied Thrush is large and I took a couple of reference shots to show its size. Here it is with two Northern Cardinals and the picture below includes a couple of Juncos. 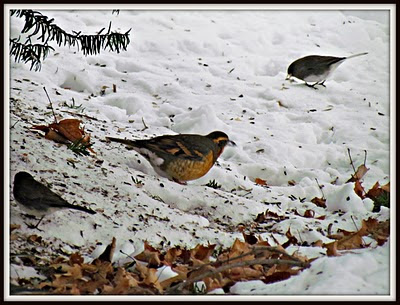 Like most Thrushes, it was shy and tended to stay beneath branches and I had just a couple of opportunites to see it in the open.

People are more secretive about bird sightings as postings of unusual species on the internet can encourage some rude and intrusive visits from inconsiderate people. There are few people who share locations where owls have been seen because irresponsible photographers will stop at nothing to get the pictures they want. So I appreciated the opportunity to enjoy an unusual bird on private land owned by people who are nature lovers and nature sharers.
Posted by Ruth at 9:23 pm