Some bird groups such as shorebirds, gulls and raptors can be challenging for an amateur to identify, especially if they are seen only in flight. Very slowly, I am becoming more confident in recognizing local hawks and falcons. On April 14, 2007 I had to ask for help to identify a Red-tailed Hawk and now I see them so commonly that I hardly take notice of them. Last Sunday a Coopers Hawk flew right above my head on its way to a bird feeder in a yard adjacent to the church parking lot. You can be sure it was not looking for sunflower seeds.

At this time of year there are many Rough-legged Hawks in the farmland north of our city. During the recent Christmas Bird Count they outnumbered Red-tailed Hawks. They are easy to identify in flight as their black "bracelet" bands stand out under their wings. Northern Harriers are readily found this year too with their distinctive flight pattern and black wing tips. Red-shouldered Hawks are locally uncommon but one bird is very consistent in its winter territory which is in an accessible location by foot and car.

The old lift bridge at the entrance to Hamilton Harbour has been home to Peregrine Falcons for some time. I have stopped here often hoping to see one, but without success. Last Sunday I was disappointed that the parking lot near the canal was closed and I took another trail along the lake front instead.


As I was looking for ducks, I watched a Peregrine Falcon fly off the bridge and catch a pigeon in mid air in easy viewing distance. It then flew back to the bridge to the tower and proceeded to eat its lunch. I don't think I would have seen it if I didn't see it land as it looked like a small dot on the big steel structure. I took the picture below with full digital zoom.
I spent another hour or more in the area and saw one more kill. Dozens of hapless pigeons sit on the same bridge lined up like bar-b-qued chickens at a supermarket take-out. The Peregrine pair do not have to go far for food and have an ideal location for raising their young each spring. 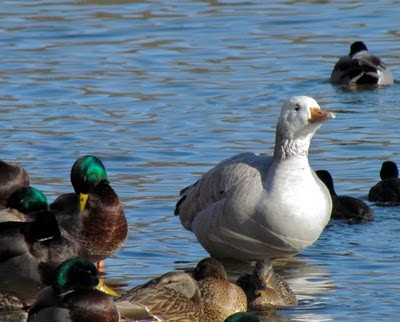 On a much less regal note...
I saw this fat goose near the shore and hoped that was an unusual wild species. However, it could be a domestic goose gone wild as it does not resemble anything in my bird guide. Does anyone know for sure? I have not counted it in my total yet.
Posted by Ruth at 9:43 pm