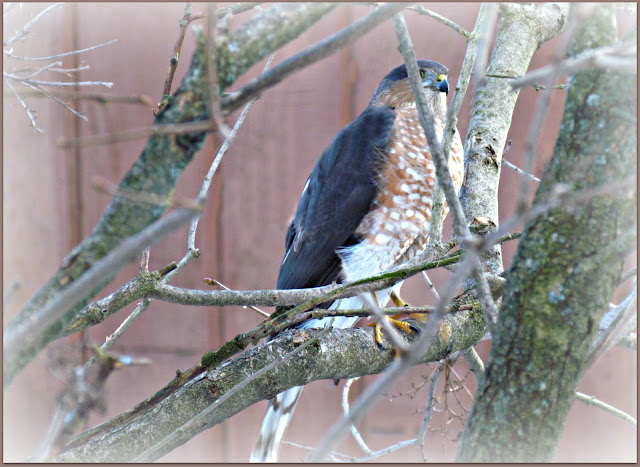 Our feeders have been very busy these cold days and it was not surprising to see a Cooper's Hawk swoop into the lilac tree. The yard was totally silent and even the silly doves were nowhere to be see. But one bird did not make an escape into the big pine tree. A White-breasted Nuthatch flattened itself and clung motionless on the tree bark just a metre away from the hawk. It was hidden only by the width of the small branch and its blue feathers stood out in the afternoon light. 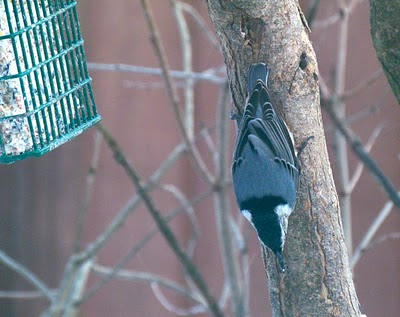 I know the nuthatch saw the hawk, but did the hawk see the nuthatch? Was this a game to see who would be still the longest?

We watched through the window not wanting to see the small bird become dinner, but then, the bigger bird had to eat too. After several minutes things were unchanged. I walked non-chalantly out on the deck and still there was no movement from either bird. Finally the Cooper's Hawk flew off but the White-breasted Nuthatch remained. I could have picked it up but instead shooed it off and watched as it departed with a squawk to the safety of the pine tree. 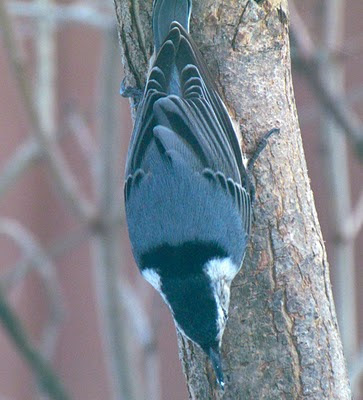 Lucky? Smart? I would think both are correct answers.
Posted by Ruth at 10:39 am