Last weekend I made my annual January visit to Burlington Bay and Lake Ontario below the Niagara Escarpment (map) to find wintering ducks and birds. It was a beautiful sunny day and a light dusting of snow had fallen the night before. This area is always good for birding at any time of year and there are many experienced birders about who are willing to point out new species and share interesting information. The video above shows Burlington Bay at Lasalle Marina with the Burlington Skyway in the background. The lift bridge is behind the skyway.  The Trumpeter Swans were in a very trumpeting mood. 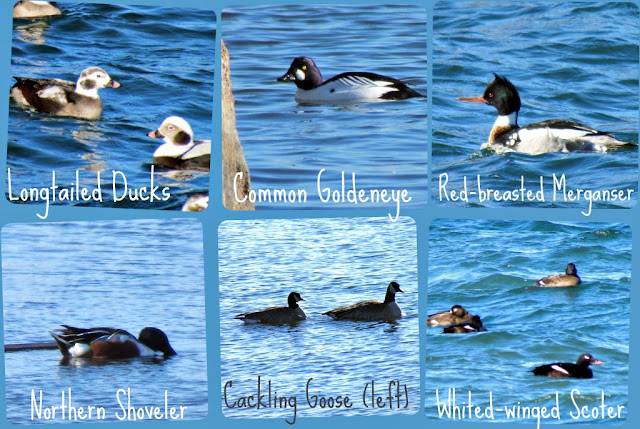 Lasalle Marina is one of the few places where there is a good likelihood of seeing Trumpeter, Tundra and Mute Swans together. There were 13 adult Tundra Swans here according to a volunteer who counted their large yellow tags this day. There were many young Trumpeters around and the species is once again doing well in this province. The bay is usually frozen in January and the ducks are generally closer to shore. But with open water this year, the birds were spread out and harder to see. Some birders with scopes were looking at a Brant Goose and a White-fronted Goose and I saw some good pictures which were taken by others. I did not count them even though I saw a blurry form in the distance as I would never have picked them out on my own. I did see a few Cackling Geese, a subspecies of the Canada Goose, and they were a first for me.


Burlington Canal, between the skyway and the light house, was filled with approximately 3000 Long-tailed Ducks along with several other species in smaller numbers. (I do not know how you count that many ducks but someone was doing just that). A pair of Peregrine Falcons live on the lift bridge and last year was the first time I saw them. Now that I know where they perch, it is easier to find them. This is one place where a birding scope would be very useful. In the picture above, the arrows point to the Peregrine Falcons, the larger female on the wire and the smaller male on the green wall. There were hundreds of pigeons on the bridge for the falcons to choose from for their next meal.

I took the picture on the left of the lift bridge and canal from under the skyway. Because it was a bright day, I was able to take pictures of the falcons with full digital zoom (840 mm). The bird on the right looks like it has a pigeon stuck in her throat, but it was likely the stiff wind ruffling her feathers.

I also visited the nearby Burlington Botanical Gardens and Arboretum and failed to find some usual winter species. Red-breasted Nuthatches are usually common around feeders (including mine) but I have not seen one this year. Surprisingly, I saw a Brown Thrasher, a Hermit Thrush and a Carolina Wren. It is the first time I have had a good look at a Carolina Wren. I live 45 minutes to the north and have never seen one around home. It was my favourite bird of the day as it sat all puffed up in the sunshine.

And now for some personal whining...

I have used Picnik, a wonderful online photo editor, for several years now to make collages, frames and for doing general touch ups to my pictures. Recently Picnik was bought by Google and the site is being closed down in April. We have the full Adobe Photoshop on our desktop computer but I never found it user friendly for quick editing. I let Google know what I thought about them and cancelled my Google+ account (which I didn't use anyway). Now I have to try and find another editing tool with the same features and simplicity as Picnik.
Posted by Ruth at 11:46 pm