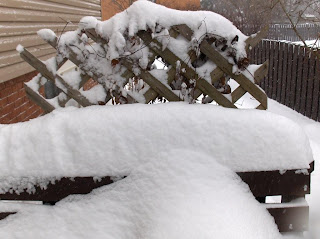 We received our promised foot of snow this weekend and flurries continued for most of yesterday. "Digging out" has been the "work out" for most residents, clearing fallen snow and then clearing and re-clearing the end of the driveways after the plows have gone through.
The bird feeders have been very busy, and normally shy birds such as Cardinals are now using the window feeders. The Juncos are having trouble finding enough fallen seed on the ground and are starting to use the hanging feeders as well.

This weekend, the Christmas Bird Count for our area was held with the north part of the region's count on the 15th and the south's count on the 16th. The second count had to be postponed until the 27th of this month due to the weather. Here is the preliminary report for December 15th from our excellent local birding forum.

This is just a partial report on the Kitchener Christmas Bird Count, which was held yesterday (December 15).

Overall, most species were seen in on or about average levels, with a few exceptions - and those were very notable. Certain finch species were way up, especially Common Redpoll, which is having a major year of irruption. The total for that species is probably going to be about 3 times the previous high (not all results are in yet). There were also major numbers of Pine Grosbeaks around, although they were not up quite so dramatically - ...There was also a lone Evening Grosbeak reported from the Laurel Creek Conservation Area.
The other bird that has exploded in numbers as of this year is the Wild Turkey. From zero six years ago, we now are looking at hundreds in the region. We saw three small flocks, one in a corn field just north of the New Dundee Road/#401 Bridge, one off Groh Ave. just south of Tilt, and the last practically in town, just east of Homer Watson Dr. and south of Block line.

One new bird for the count was discovered, a Hoary Redpoll in the Beechwood area of Waterloo, in the greenbelt near Clair Lake. 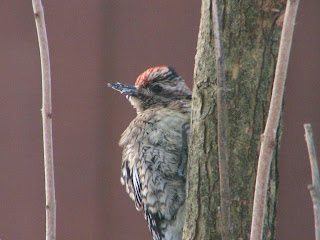 This morning I noted a new visitor to my suet feeder. This female Yellow Bellied Sapsucker was around for quite a while and I was able to get a few pictures. I have never seen this bird before and reported it to the forum. The local CBC organizer responded...

Indeed it is (a YB Sapsucker)! Poor thing, she looks very chilled - good thing there's lots of yummy fat for her to eat. That's an excellent find for winter, around here. Happily, this date makes it eligible as a "count week" bird for the Christmas Bird Count. (Three days before, and three days after). 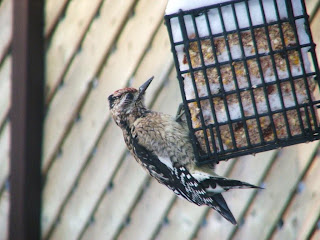 I have never participated in a Christmas Bird Count before but was happy to have made a little contribution from my kitchen window. Next year I will seriously plan to be part of the bigger event.
(Read here for Monarch's account of the CBC in his area of New York State)
Posted by Ruth at 10:50 am