Farms and Barns in Mennonite Country 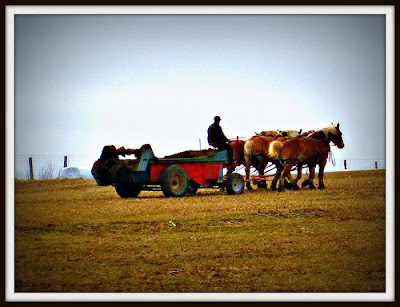 My husband and I drove north of the city on Saturday to get maple syrup from a local farm and to buy some fresh citrus fruit that had just been trucked from Florida to the Orange Barn in Millbank. From Elmira to Millbank is Old Order Mennonite country and travelling the roads is a trip back in time in many ways. Wide shoulders along the highways are for horse and buggy travellers and they are frequently seen. Tidy mixed farms with large farmhouses and gardens feature colourful barns and outbuildings that brighten the dull March landscape. 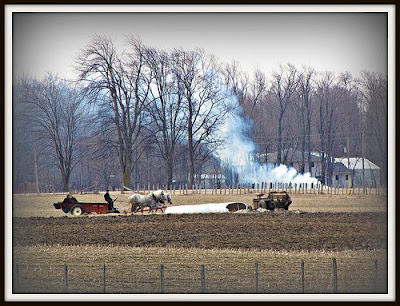 Several farmers were spreading manure on their fields with horse drawn spreaders and curls of smoke from sugar shacks could be seen rising from many woodlots. We had hoped to see some maple sap collected but the temperatures were well below freezing in the morning so not much was running today. School aged children wrapped in blankets sat at the end of laneways beside small tables which displayed maple syrup, maple candies and maple butter for sale.

Earlier this week a fire destroyed a furniture business on an Old Order Mennonite farm in this area. No one was injured and no livestock was lost, but damage was estimated at $150, 000 dollars. 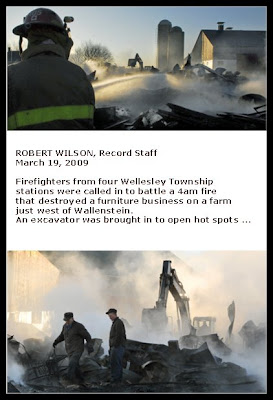 Pictures and text from The Record

These pictures were in our local newspaper and the destruction of the building was complete. The Mennonite community moves quickly to help a neighbour rebuild after such a loss. We passed the farm and dozens of buggies were parked at farms on both sides of the road. 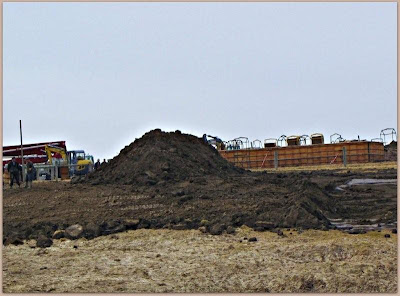 A large new foundation had been dug and the new building was well under construction only two days after the fire. Some motorized construction equipment had been hired for the excavation. We were there just before noon and the men were taking a break for lunch which was being served at the farm across the road. I hope to go back early in the week to see what progress has been made. 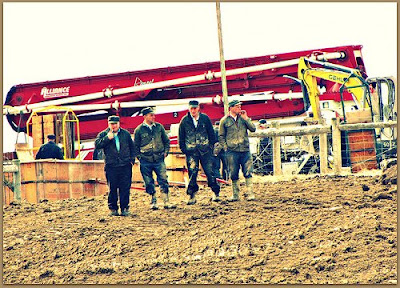 The Mennonites have a strong social network with support and provision for members in the event of illness or other loss. They will also come along side neighbours who are not of their faith who have had a barn fire and rebuild for them in the same way. Many of them do not enrol in our public health care system and if hospitalization is needed, the $1000 and day bill is covered by their community.

There are many other generous people in our world who are quick to help out when they hear of a need. But it is easier to give money than to leave your own work at a busy time of year to help a neighbour. With these Mennonites, many hands finish the job quickly and everyone is back to their own business in record time.
Follow this link for more My World posts from around the globe.
Posted by Ruth at 12:01 am

Email ThisBlogThis!Share to TwitterShare to FacebookShare to Pinterest
Labels: Mennonites, my world