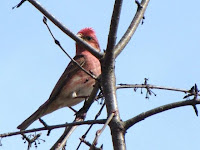 We are now in the best birding season of the year when new birds are arriving daily and the trees still remain leaf bare. It will be another six weeks before foliage will block the view of of the treetops and while I love the fresh green leaves of May, they do hide a lot of bird activity. Today I drove through the country as I heard that Great Blue Herons were already nesting in a rookery a few kilometers from my husband's workplace. There were no herons around when I got there so I went to what has become a favourite spot for easy bird watching.

Guelph Lake Nature Centre was a beehive of activity as many children were participating in the March break day camp. I stood by the feeders but had little expectation of seeing anything unusual due to the noise and traffic of little feet. There were plenty of Chickadees, Pine Siskins and Tree Sparrows about as usual, but I noticed a bit of unfamiliar red high in a nearby tree. 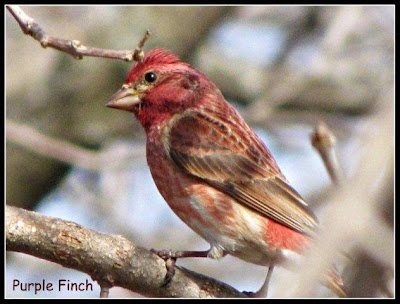 I have looked diligently for Purple Finches and have only seen one group of females feeding on grass seeds near the river. I had never found the males with the "raspberry wash" colouring. Several males came to the feeders and were not frightened off by the children. 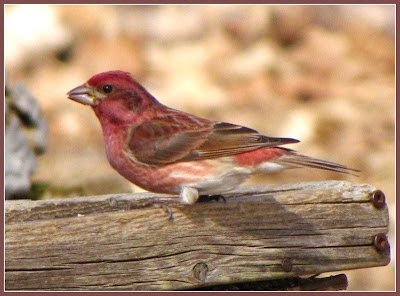 I have taken pictures of extra red House Finches at my feeders and hoped that they were Purple Finches. But the reds of the two birds are very different and I will not mistake them again.

There was another bird there today. I heard it before I found it as it remained deep in the brush, scratching for seeds in the ground. 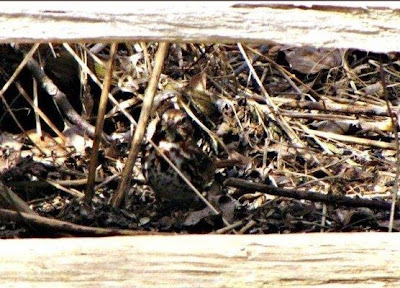 Can you see the between the fence rails? (click picture to enlarge) It was very well camouflaged. I caught a brief glimpse of the reddish brown colour and thought it was a Fox Sparrow at first. (It really was a Fox Sparrow. See this post for clarification.) This bird was quite intimidated by all the people around but I imagine it would sing its lovely song in the evening and morning when things were quiet.

Once again I proved the rule;- you don't necessarily find what you are looking for, but you always find something you are not expecting.
Posted by Ruth at 10:20 pm