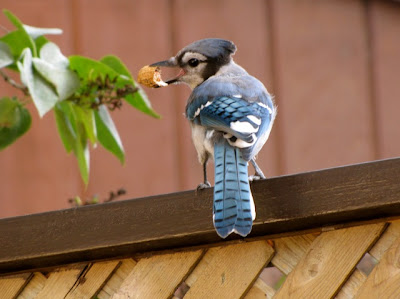 Last month I mentioned the trio of Blue Jays who were stopping by our yard for peanuts. At that time they were very skittish and would vanish quickly if I stepped outdoors. In recent days they have become much more assertive and call for their treats if the peanut feeder is empty. As soon as they hear someone in the kitchen through the open window, they will give one of their more gentle and musical calls from the deck screen or lilac bush. They know I will be out with peanuts and now wait and watch as I place them on the picnic table. While they are unlikely to ever eat from my hand, they will now come down to the table when I am still on the deck. 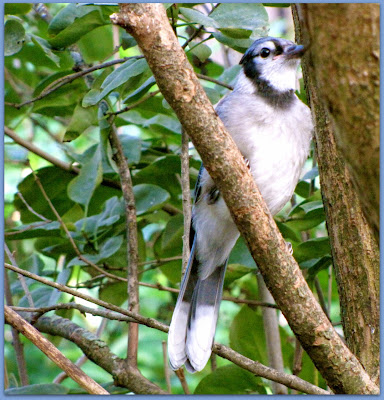 Two of the Blue Jays have a normal appearance, but the third is greatly altered lately. I took a photo early one morning as the sun was just coming up which showed its bald, featherless head and neck. It is able to fly normally and seems otherwise fit and healthy. Here is an explanation from Bird Studies Canada. I have copied the information as links tend to go dead quickly.

At Bird Studies Canada, one of the signs of changing seasons is the type of bird questions we get from our members and the public. Recently, we have been receiving concerned calls about follically-challenged birds. While most of the calls are about Blue Jays, other baldies include Northern Cardinal, Common Grackle, and various sparrows.
So what's up with these bald birds? Several explanations have been proposed, with the two main ones being a severe case of feather mites and an unusual moult pattern. Wild birds normally carry small numbers of feather mites - tiny arthropods (related to ticks and spiders) specialized to feed on bird feathers. Birds must regularly groom their feathers to remove these mites and other parasites. While birds can groom most feathers with their bills, they can't reach their head feathers. Mite populations on head feathers can build up to the point where the feather is totally destroyed and/or has been pulled out by the bird scratching at its head. 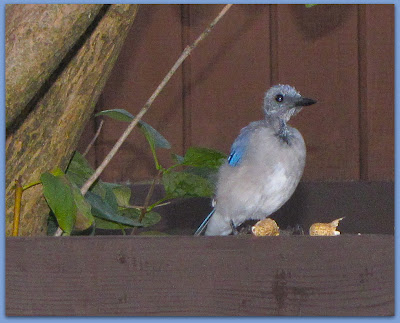 Adult Blue Jays and other songbirds normally replace all of their feathers in late summer or early fall following the breeding season. This moult is usually done gradually over a period of a few weeks, with feathers being shed and replaced in a regular, staggered pattern so that at no point is the bird naked or flightless. However, there is evidence that some individual birds will drop most or all of their head feathers all at once - resulting in temporary baldness. This atypical moult may be due to stress or malnutrition in a particular year, but some captive birds have been reported to follow this same pattern of going totally bald each year even though they are well fed and healthy. So it does look like some individual birds may indeed be "follically challenged" - at least on a seasonal basis. Whatever the cause, the good news is that this condition is normally short-term, with a new set of head feathers growing in within a few weeks.

This "follically challenged" Jay comes very early in the morning or at dusk and is seldom seen with the other two right now. It must be somewhat self conscious about its appearance. 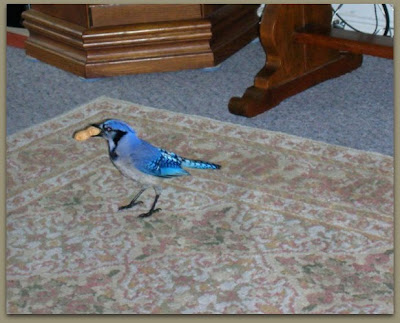 Dennis and Shirley are friends who live nearby and attend our church. They have been visited by a particularly bold Blue Jay this summer who knocks on the window and then comes into their living room to take peanuts from the carpet. Dennis sent me this photograph which he took a few weeks ago.