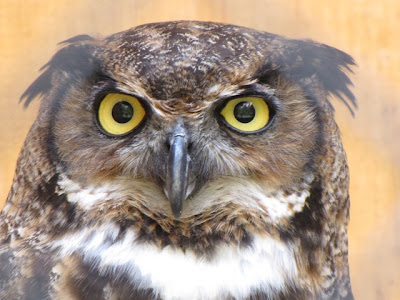 I visited a raptor rehab centre last weekend and took photos of this captive Great Horned Owl. It stared at me, (or through me) silently and then closed its eyes in seeming disinterest and boredom. Owls are often equated with wisdom and this is well discussed in Just 3 Things, a new blog I visited this past week.

If asked to give an opinion on why owls are considered wise, I would say, "They are observant and often silent."

Owls see well, particularly in total darkness, and their hearing is highly developed. I am a fan of good mysteries, my favourite detectives being Miss Marple, Mma Precious Ramotswe, and Hercule Poirot. The darkness of evil and crime is penetrated by their fine listening and observation skills and their ability to analyze facts in a creative way.

There is a tendency to verbalize more rather than less as we get older. Some of my geriatric patients will talk through an entire treatment session and I have to redirect them to the task at hand. A life time of experience adds up to plenty of subject material! How easy it is to trump the know-how of someone younger and to minimize their judgment and maturity. I have raised three children and when listening to a young parent describe a sleepless night with a sick child, could interject that I have lost several months of sleep over the years. It is harder to just listen and empathize without drawing the attention back to my own personal perspective, especially if my opinion is not requested.

The best conversationalists say little about themselves instead focusing their attention on others and listening with genuine interest. Proverbs 10:19 says, "When words are many, sin is not absent, but he who holds his tongue is wise." Proverbs 17:28 adds, "Even a fool is thought wise if he keeps silent, and discerning if he holds his tongue."

Perhaps the owl is not as intelligent as we may think, but wisely he is not telling.
Wh 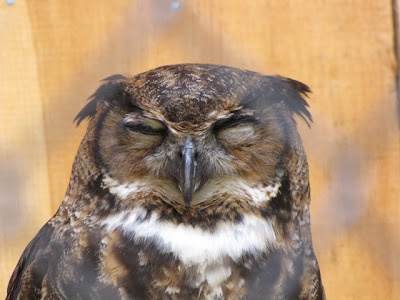 en words are many, sin is not absent, but he who holds his tongue is wise." Proverbs 17:28 adds, "Even a fool is thought wise if , and discerning if he holds his tongue.