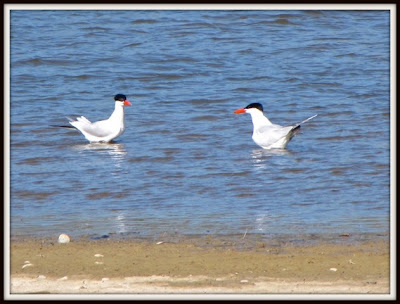 With a personality type INFJ, I am a very expressed introvert, a moderately expressed intuitive, a slightly expressed feeling, and a moderately expressed judging personality. I haven't figured out what bird matches me best, but I assure you I am not a bright red Cardinal, a flashy Indigo Bunting or the Red-breasted Grosbeak I saw singing on a tree top today. The brightly coloured Caspian Terns in the first picture are not me either, but I am not as introverted as the next two birds which I was very fortunate to see this spring.

A couple of weeks ago I was walking along a swampy path looking for wildflowers. I bent over to take a closer look at flowering moss and a strange bird moved not 2 metres away from me. It was the first time I had seen an American Woodcock and it was the most camouflaged bird I had ever seen. My camera could not even focus on it quickly as it was indistinguishable from its surroundings. The picture on the left is not my own but is from answers.com. This is one bird that would benefit from a name change considering the evolution of English language usage and meaning.

Last week I read that a Pied-billed Grebe was frequenting a local pond. I have seen this very plain, small bird a few times from a distance during migration periods. I scanned every part of the pond with binoculars for 15 minutes and could not see the bird at all. It was very windy and the water was rough. I heard its call, which is at least ten times larger than the bird itself and still could not locate it. Finally I spotted a slight irregularity in the middle of some lily pads and if you squint at the picture below, you can see that the resting grebe looked just like an wind-blown lily pad. 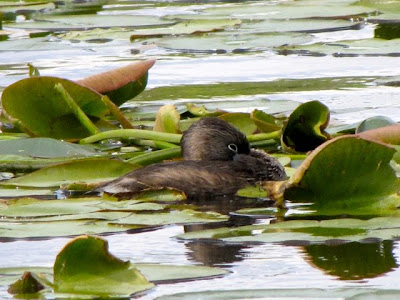 Even when it lifted its head, it looked unremarkable. Another birder mentioned that he watched as a large snapping turtle grabbed another Pied-billed Grebe in this pond. There were four of them and now there is only one. Perhaps one pair have flown off and this one is still calling for its mate. Its ability to blend into the environment is not enough to protect it from all predators. 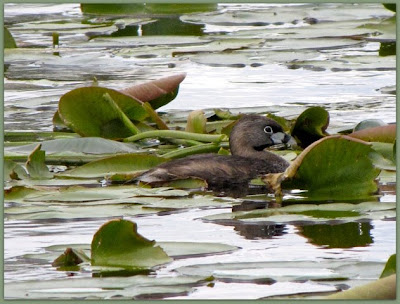 There are a number of other secretive birds in our area which I have yet to see. They are apt to be missed when my attention is on some noisy, colourful, extroverted bird instead. And that is exactly where the plain, introverted birds want my attention to be focused.
Posted by Ruth at 12:00 am