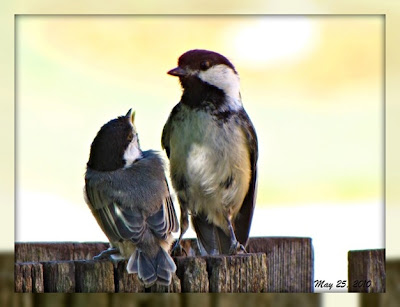 When I arrived home from work yesterday afternoon there was plenty of activity in the yard. All the young Chickadees had fledged and the parents were working harder than ever before keeping track of the youngsters. Instead to delivering food to one address, they were feeding birds in the maple tree, the Saskatoon berry bush, under the shrub in the garden and beside the fence. 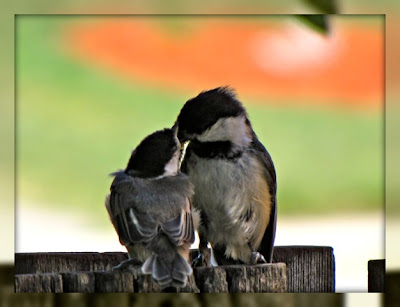 One little bird sat on the fence for the longest time lacking the courage to join its siblings in a more protected location. I was able to approach it and while it ruffled its feathers, it couldn't get airborne. The parents would bring it food and it just sat there waiting for them to return. 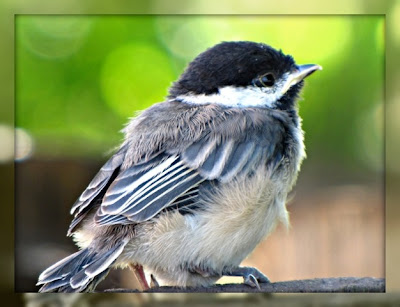 As well as feeding the fledglings, the parents defended the area aggressively against anything that approached. Crows, squirrels, chipmunks, even a young robin who was also looking for a parent were chased away. 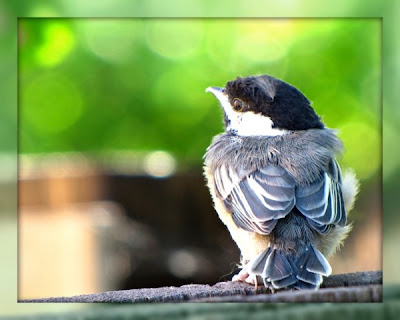 It is remarkable how these birds have developed in twelve days. They are very cute, unlike baby Northern Cardinals who take the prize for awkward and ugly. Their beaks are still wide and yellow and baby feather tufts are still sticking out from the sides of their heads. 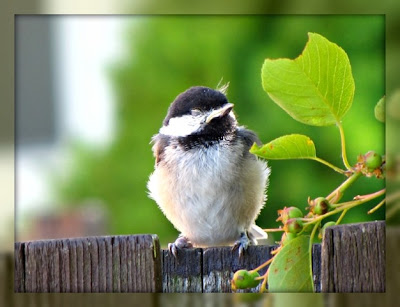 The young Chickadee's eyes were often closed as if the world was just too bright and stimulating. They are so vulnurable at this stage and in reality I know it is unlikely that all of them will survive. I stayed out most of the evening watching them and making sure prowling cats in the neighbourhood did not come by. This bird finally flew off the fence and was surprisingly graceful in the end. 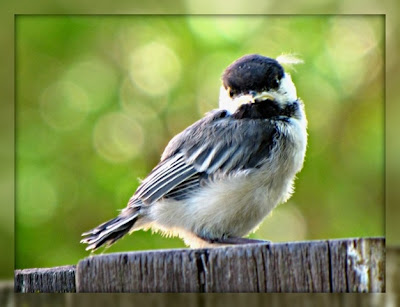 They have a lot to learn very quickly and I wonder when they will start visiting the feeder. I usually do not put much out for the birds in the summer but may hang the peanut feeder for part of the day. The adult Chickadees have appreciated the small black sunflower feeder in the garden in the past few weeks.