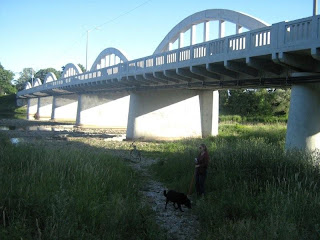 Dakota and I in the dry river bed

We used to enjoy the TV show Rescue 911 which ran from 1989 to 1996. William Shatner narrated this informational series of true stories before television became over run with reality shows. Real life heroes who rescue others in peril are always interesting subjects.

I work in a rehabilitation hospital that has no emergency department. There are no physicians in the building after rounds are finished each weekday. If one of our patients experiences a medical emergency, we have to call 911 and request an ambulance to rush them to the acute care site. But I have seen the staff perform some real life rescues in the past couple of weeks. 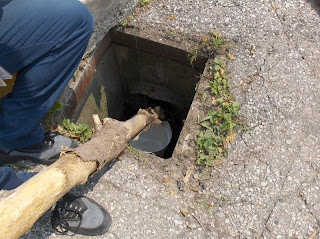 I drove in the parking lot last week and heard an awful racket in the storm sewer. I thought a fledgling may have fallen in the grate and could not see what was making the noise. At noon we discovered a distressed baby raccoon perched above the water. It had crawled through a drainage pipe and did not have enough room to turn around. The edges of the storm sewer cover had been paved over and there seemed to be no way to rescue the little animal.
Someone called security and before long, a number of able men put their heads together and planned the rescue. A truck and rope loosened the grate and someone found a log that gave the little raccoon a route to safety. A pail was put below the pipe in case it jumped in the water.
The terrified creature did land in the water and as it was lifted out, jumped back in the pipe, this time head first, and exited the way it had come in. Success! 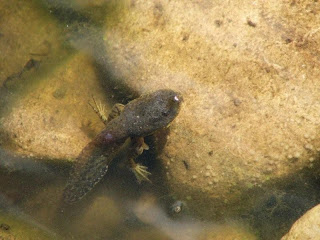 The river is so low now that there are many pools of water separated from any water flow. The heat of the past week is drying up these shallow puddles very quickly. Many minnows and developing tadpoles are competing for diminishing amounts of water. The herons and raccoons are having an easy time finding food. One of my work mates decided to scoop up some of the larger tadpoles and move them to deeper pools of water. There were a number of them stuck in the mud, but they did revive when they were relocated. There are many frogs and toads out sunning at noon who are able to hop to water, and there will be tadpoles that develop to maturity without our help. But it is gratifying to give a few more a chance of survival. 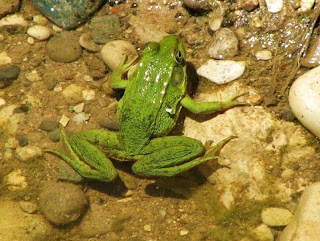 Recently, there have been literally thousands of tiny toads scurrying around the rocks and paths. We walk the paths carefully trying to avoid crushing them with our feet. I have seen two small ribbon snakes hunting them and understand that this is part of nature's cycle of abundance. 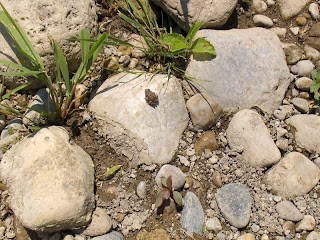 Tiny toad on the rock

It is nice to work with people who are caring, not only with our patients, but also with the little living things that many would consider to be pests. Those who relieve the suffering of the smallest creatures will be sure to treat other people with respect and compassion.
Posted by Ruth at 9:28 pm