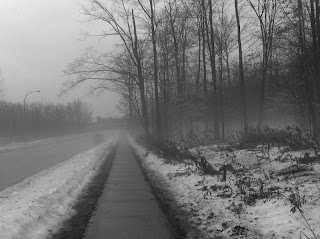 Autumn was unseasonably warm with October temperatures as warm as August. The leaves fell from the trees far later than usual in mid-November. The first snow came the third week of November and then snowfall upon snowfall ever since. This week the temperatures are unseasonably warm again and we have had several days of grey fog as warm air hovers above the cold ground. Fall leaves were not raked before the snow came and now the bare, leaf-covered ground is once again exposed.

American poet Marge Piercy grew up in Detroit, Michigan and experienced the same winters as we do in southern Ontario. This is one of her earlier poems.

Six days
narrow as razors
yet wide enough
as that single bed
we slept on, tangled. Deep enough to free fall
twined, dancing
through that huge temporary
space, wind whistling
the land turning
like the hands of a clock
the sun far below us. 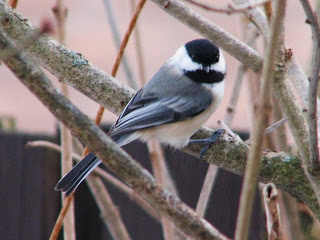 Through dead winter
the chickadees are calling
as they do in spring
fe-ver, fe-ver rising,
descending sweetly. 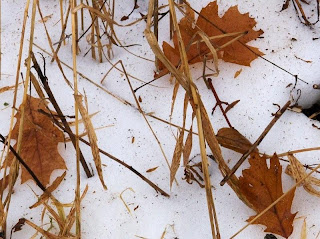 A January thaw, country
roads turned chocolate pudding
our boots with sucking sounds
clambering over the still-
intact oak leaves
pages of an old diary
an old year
thrown off.

Email ThisBlogThis!Share to TwitterShare to FacebookShare to Pinterest
Labels: Poetry, seasons of life