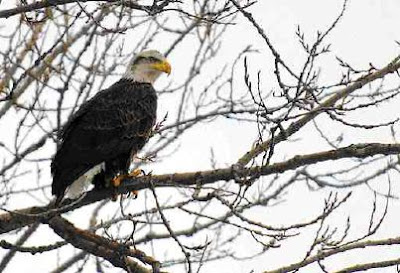 In June 2007, the Bald Eagle was taken off the list of endangered and threatened wildlife in the USA. Most of the world's Bald Eagles live in Alaska and British Columbia but they are found in most of the North American continent.

Last winter, twelve Bald Eagles overwintered in our area, four times the number found here a decade ago. Sightings are still rare enough that the birds made the front page of the newspaper twice in a month. I have gone looking for them several times in the last six weeks with no success. Because the trail near the hospital was impassable due to flooding this week, I drove five minutes downstream to another trail that is situated on a higher bank of the river.

Three people were there using a scope and recording some data. Ever curious, I found out they were from the Ontario Ministry of Natural Resources (MNR) and were conducting a mid-winter water bird count along the Grand River. They asked me if I wanted to see the eagles. I couldn't see them, but a mature pair were there, several hundred metres upstream sitting on a large willow tree. After viewing them through the scope, I found them easily with my binoculars and using the maximum zoom on my camera, I was able to take this blurry shot. The picture above was taken by a photographer for our local newspaper. The eagle he photographed was in the same tree as the ones I photographed and may be one of the same birds. (The MNR people told me the newspaper photographer had a very large camera!)

The group from the Ontario MNR were pleased to see a pair of Bald Eagles, the larger female sitting on the left. They are hoping the eagles will once again nest here and stay year round. 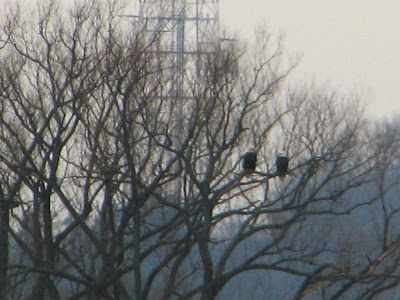 Same Eagle Perch (my photo)
Larry of the Brownstone Birding Blog suggested participating in a bird listing game called Big January in which the birder counts as many birds as possible this month. (His goal in Connecticut is 90 birds, but I doubt this is a realistic target for this area of Ontario in the winter)
Early Thursday morning, my husband awakened me at 4:30 AM because a Great Horned Owl was hooting in a tree right outside our bedroom window in the city. There is no moon this week and it was too dark to see, but its identity was unmistakable by its call. So I will count it too.

Here is my list for the first eleven days of the year...

That's all I can remember right now for a total of 30. But the eagles are my highlight of the month no matter what else I see.
Posted by Ruth at 9:43 pm