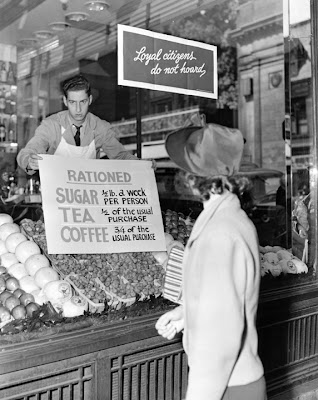 All of the countries involved in World War 2 had some kind of rationing program that affected every citizen. We received the first set of the British series Foyle's War (highly recommended) from my brother's family for Christmas. The crime series deals with everyday life in wartime England and many of the stories involved theft and black market activities involving food, fuel and munitions. RuthieJ commented on my last post saying,

"I found it especially interesting that it was actually illegal to feed birds. Makes me wonder if that situation occurred now, would I break the law?? I imagine it would have been impossible in those days to even sell birdseed don't you think?"

Britain, being an island, had big problems with supply as well as the challenges of outfitting an army. It was even illegal to sell meat for dogs. Shipping was disrupted for years and items like bananas were never seen. Canada did not experience rationing in such a stringent way. Food rationing began in January of 1942 and fuel was rationed starting in April of the same year. Sugar, tea, coffee, butter, fat and meat were rationed and other foods were often not available at all.

Mom told me that her father, being a country doctor, had a special permit for fuel and was not subject to restrictions. However, her family raised sheep for meat (she never served us lamb at home, having tired of it as a child) and were restricted in other food items. Everyone was encouraged to grow a "victory garden" and housewives were given special tips on canning and preserving by the government.

One surprising effect of rationing in Britain was that the health of the nation actually improved as people ate a more balanced diet, less meat and fat and had more exercise. (This point system for foods was invented long before Weight Watchers started their points program!). No fuel rations were required to pedal a bicycle or to use public transit so people had to use their legs.

This calendar was issued in our city in the 1940's (Click to enlarge)
Restaurants did not serve meat two days a week and the days when coupons could be redeemed were highlighted. And recycling, from bones to aluminum and other metals to old clothing was part of the war effort at home. The slogan for the times was, ''Use it Up, Wear it Out, Make it Do and Do Without."

Many of my patients lived through the great depression and then through the Second World War, overseas or in Canada. The effects of doing without has stayed with them for a lifetime and we sometimes see them hoarding sugar packets, jam, and other left-overs from mealtime in their bureau drawers.

I would not like to see a return to enforced rationing, but in this day of environmental concern and overconsumption, we could revisit some of the lessons learned in the war years.

Do you have any family stories about war time rationing?