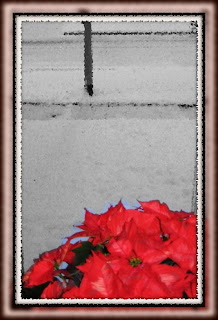 The view from my seat by the window
This summer I re-read Pause: An Emily Carr Sketchbook, a book of Emily Carr's writing and drawings that was compiled and published after her death in 1945. From the dust cover of the book...

"While studying at the Westminster School in London in 1902, Emily Carr so undermined her own health by overwork that she "subsided into Sunhill Sanatorium with a limp and a stutter" for eighteen long months. Pause is the story of this enforced hiatus in her artistic development: the dreary, stultifying San routine, annoying doctors and devoted nurses, the foibles and courage of the patients. Emily Carr's active mind rebelled at San restrictions: "They gave us very little credit for having sense at Sunhill. We came here to pause our ordinary activities. Even thinking was prohibited." But her natural gaiety could not be defeated. She delighted all those around her with verses, cartoons, games and, most important of all, by her interest in the glorious songbirds of the English countryside which then engrossed her attention for the first time." 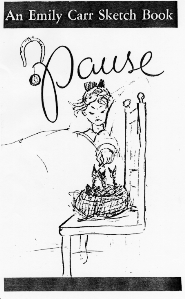 I love Emily Carr's books and have Grandma's collection of all that have been published. She is best known as a pioneer Canadian artist who struggled for years to gain recognition for her work. In the early 20th century she travelled to many isolated Indian villages in British Columbia painting totem poles and scenes of natural beauty in the magnificent forests of Canada's west coast. In later years illness kept her from her beloved outdoors and canvases so she started her literary career from her sick bed. Her writings are even more brilliant than her paintings in my opinion. No word is wasted as she creates images as vivid to the mind as any art form.

Pauses are not welcome in our busy modern world. Quick fixes are sought, vacation time is neglected, important relationships ignored, and days are often overbooked with activities.

I came home late Tuesday night two hours after I started waking from a general anaesthetic. I was aware that I was the last patient on the Day Surgery unit. My nurse had already worked four hours overtime and could go home when I was discharged so I forced myself into alertness. My daughter drove me home and I slept through the night. In the morning I felt great and wrote Wednesday's post in a somewhat euphoric state. I was still in a morphine/versed/gravol induced haze and had minimal pain and swelling. I laughed at the prescription given by the surgeon...50 percocet! I wouldn't be needing anything more than plain tylenol. In fact, I could walk well without crutches even though I had been told to use them all the time. I would be back at work in just a few days. 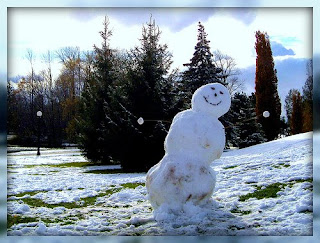 Off-centre, but happy
Things were a lot different a few hours later as my knee ballooned and pain marched well ahead of me. While percocets really don't take away pain, they cause you not to care about it or anything else (scary!). So I am learning the value of rest and patience. I have caught up on some reading and have spent time in contemplation.

My coworkers sent me a large poinsettia and a gift bag full of generosities. As I rest and look past the red leaves, I see the snow in the front yard and roadway.

A pause at a busy time of year may not be a bad thing...

I have really appreciated Ginger's posts this month and they have been part of my "contemplations". Here are a couple of links. Sundown Friday, O Give Thanks