Return of the Trumpeters: Part 1 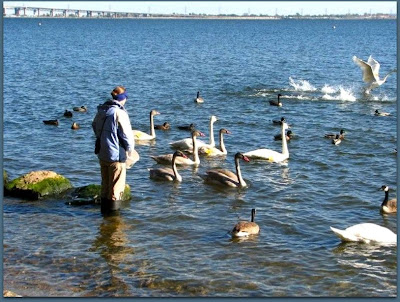 On the way home from my second trip to Toronto last week I detoured along the shore of Lake Ontario and stopped at Lasalle Park in Burlington ON. Many waterbirds spend the winter here including a large number of Trumpeter Swans. These birds are native to Ontario but were extirpated from the province due to hunting and habitat loss. Biologist Harry Lumsden worked to reintroduce the Trumpeter Swans in the 1980's. The program has been successful and volunteers continue to work to tag and monitor the birds. Harry is now 85 years old but is still very involved with the swans. This day, some of his friends and coworkers were on the shores of Burlington Bay and they filled me in on this story.

A family of Trumpeter Swans had been seen at Kirkland Lake Ontario on Monday, October 27th. The tagged adult pair had five cygnets with them. The group arrived on Wednesday, October 29th to Lasalle Park, a 626 km trip almost due south from their nesting area. The volunteers were attempting to capture and tag the five youngsters. A young woman, who is a student at Hamilton's McMaster University, lured the swans in with some food. The adults are accustomed to being fed but these cygnets had not experienced human contact before now. 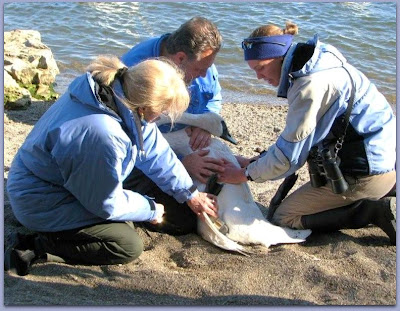 It takes skill to capture one of these large birds without injury. One of the volunteers told me that one tagger had suffered three broken ribs when the wing of the swan hit him on his side. They have a sharp claw on each foot which can inflict a nasty cut. Once the swan was restrained, it was quite relaxed, but the rest of the swans carried on with loud trumpeting. The picture above is of an adult that was being checked over because some uncaring people had targeted it with red paint from a gun. 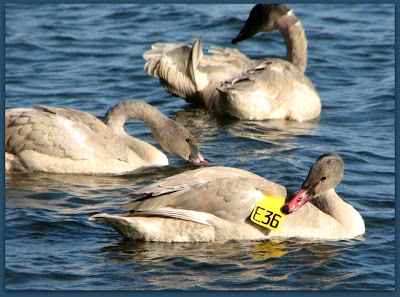 Here is the newly tagged and banded cygnet. It was pecking at the large tags on its wings but was otherwise fine. Its pink beak will be turning black over the next few weeks. Each day the swans will be fed, checked and counted by the committed volunteers.

I returned on Saturday to see the birds again...
more to come...
Posted by Ruth at 4:13 pm