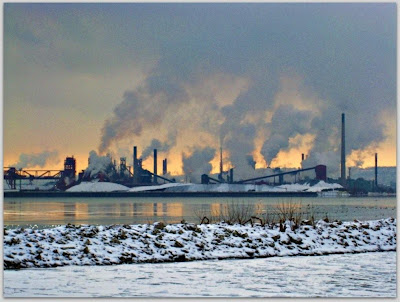 How long can men thrive between walls of brick, walking on asphalt pavements, breathing the fumes of coal and of oil, growing, working, dying, with hardly a thought of wind, and sky, and fields of grain, seeing only machine-made beauty, the mineral-like quality of life?

I took room and board with a family in Stoney Creek in the mid 1970s when I was a physiotherapy student in Hamilton, Ontario. They were from New Brunswick and like many east coast Canadians, had moved to this province to work. The big steel mills, Stelco and Dofasco, were major employers and the man of the house where I stayed worked six days a week at one of them. Each morning his wife filled a big thermos with strong, hot tea and packed him a large lunch. She used to pack me an equally large lunch even though I was not a steel worker. During those years it would never have occurred to me to spend time at the lake front or harbour area due to the unpleasant environment and poor condition of the air and water. 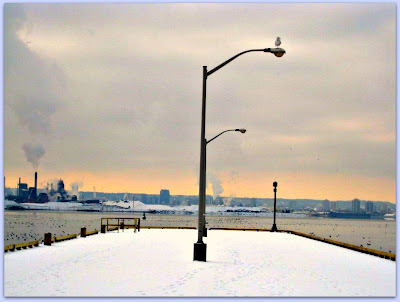 Many birds are now found in the bay

The Hamilton Harbour Remedial Action Plan (RAP) was instituted in 1992 and millions of dollars have been invested into cleaning up the water and shoreline. Artificial islands with man made shoals have been built to encourage birds to nest and fish to spawn. The value of wetlands and creeks has been recognized. Bayfront industries are cleaning their waste water before discharging it in the bay. These water discharges are warm and keep some areas of the bay ice free in the winter which benefits many birds. 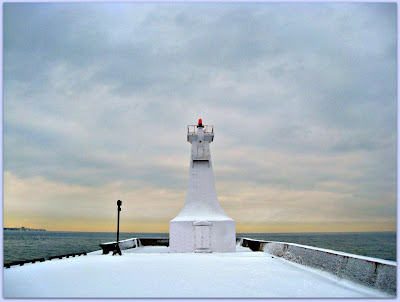 I stood on this pier under the Burlington lift bridge last week and took the first two pictures toward the city. This last picture was taken in the opposite direction looking toward Lake Ontario and the city of Toronto. This waterfront is now enjoyed by many for recreation. The steel factories are still operational and provide important jobs and goods. And the important balance between the economy and the environment is gradually being achieved.

Follow this link for more Skywatch posts from around the world.
Posted by Ruth at 12:05 am