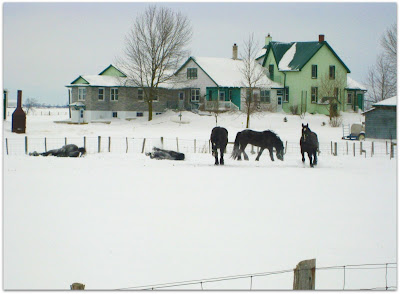 We have had a lot of new snow this month. Only one storm brought excellent packing snow which is heavy to shovel but is necessary for building snowmen and snow forts. With very cold temperatures, the snow becomes lighter and blows around easily in the wind. This is the kind of snow that prompts some people to throw themselves backwards on the ground and move their arms and legs to make a snow angel. 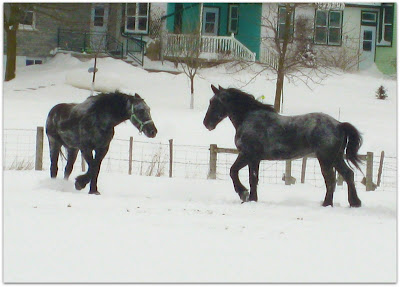 I don't know what prompted the first person to make a snow angel but wonder if mammals have some inborn biological urge to roll around in the snow. We were out in Old Order Mennonite country on the weekend looking for the Snowy Owl and came across this farm where several big horses were in a field near the road. 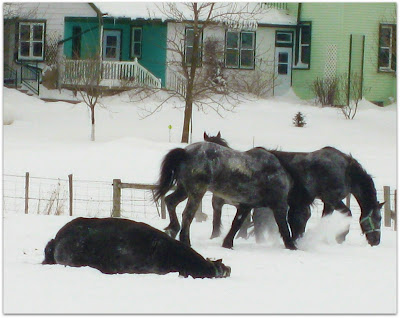 On a side note, I found the house itself very interesting as three very different structures were attached together making a large, likely multi-generational family residence. There was no electricity to the houses or the barn. 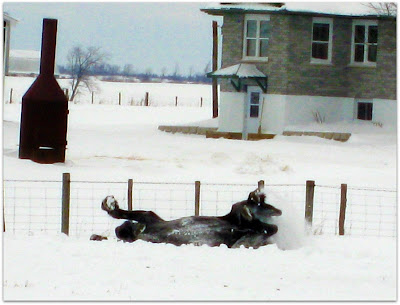 All five horses were romping in the fresh snow and one by one they dropped down to roll in the icy flakes. It was very comical to see these big animals on their backs kicking their legs in the air for the apparent fun of it. Soon they were all covered in white except for their eyes as they continued to run around and play. 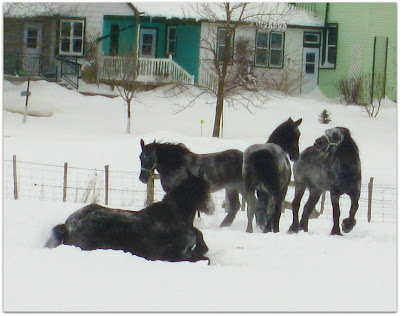 Our dog acts the same way. He loves fresh snow and rolls in it over and over again. The Becka took this 15 second video clip of Dakota in the snow on the deck. He left his imprint all over the place and whether it looks like a dog angel or not is up to the imagination. All I know for sure is that snow makes this old dog act like a young pup.

Do you know why animals act this way?

Thank you for stopping by to read about some animals in My World. Follow this link for more posts from around the globe.
Posted by Ruth at 1:36 pm

Email ThisBlogThis!Share to TwitterShare to FacebookShare to Pinterest
Labels: Mennonites, my world, this and that