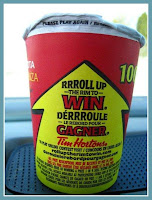 Every spring, Canadians line up at Tim Hortons for a chance to Rrroll up the Rim to Win all sorts of prizes. Actually, many Canadians line up at Tim Hortons every day of the year but irregular customers like myself make the effort to visit at least a couple of times during the contest. Tim Hortons restaurants are the pubs of Canada with most communities boasting at least one franchise and neighbourhoods like the one I live in having four within walking distance. During the contest each beverage cup has a message under the rim and prizes range from free food to a new vehicle. I needed to warm up on a cold day and entered the drive through lane in the small town of St. Jacobs to buy a hot steeped tea. 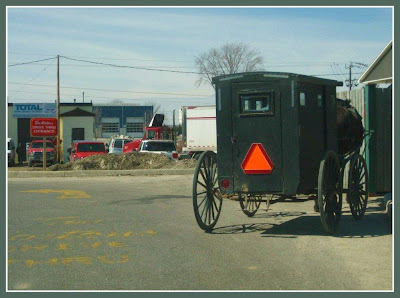 And there in front of me was a horse and buggy. At first I thought it was going through the drive through, but the horse was tied to the fence and the owners had gone inside to order. A few years ago a McDonalds restaurant opened in the nearby town of Elmira. An observant photographer captured a young Mennonite couple in an open buggy at the drive through window. But it is uncommon to see these people at fast food joints. 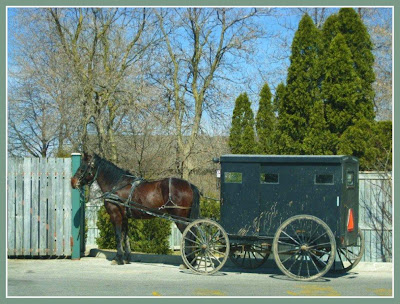 I bought my tea and when I was done, rolled up to rim to read the message Please Play Again. I am not a lucky gaming person. But what do you bet that the owner of this buggy was destined to win one of the new Toyota vehicles or perhaps the laptop computer? I am sure they would be luckier than me and would sell their winnings for some ready cash. 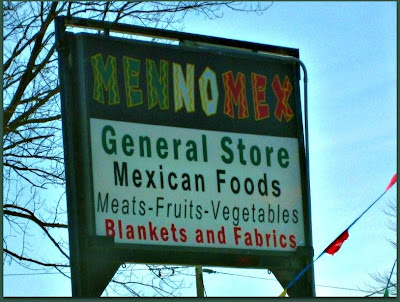 I was in Aylmer Ontario to see the Tundra Swans this week. The county has the only Amish community in the province and they are a different Anabaptist sect than the Old Order Mennonites of Waterloo Region. Aylmer is also home to a number of Mexican Mennonites, people of German origin who settled in the northern Mexican state of Chihuahua. Many of them have moved to Ontario and their dress and customs are different again than the other Mennonites here. The sign on this store made me smile. They have retained some of the culture of their chosen country just as the owner of the buggy is enjoying a little bit of the local Canadian culture.
RRRoll up the Rim!! What did you win?
Posted by Ruth at 7:05 am

Email ThisBlogThis!Share to TwitterShare to FacebookShare to Pinterest
Labels: Mennonites, this and that