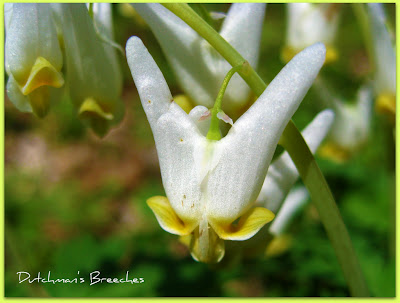 Point Pelee in southwestern Ontario is a sandy spit of land on the north shore of Lake Erie near the town of Leamington. It is the most southern point in Canada and is equal in latitude to the northern border of California, Rome and Barcelona. Because it is surrounded by water, the temperatures are even more moderate than other locations on the 42nd parallel in North America. The 20 square kilometer area includes Carolinian forest, grassland, marshes, and beach where some of Canada's rarest plants and animals are found. Point Pelee National Park at 15 square kilomemters, is one of our smallest national parks but it is a very popular destination for birders and naturalists. 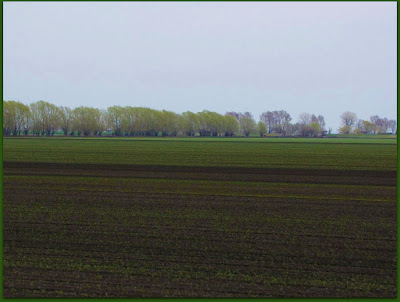 Leamington is a farming community of about 30, 000 people where large, fertile fields and numerous greenhouses are found on the very flat landscape. It is known as the tomato capital of Canada and there is a large Heinz factory in the town. There are beautiful parks along the lake shore and within five minutes of touring around I knew this was a place where I could live contentedly. Leamington is a three hour drive southwest of our home and is only 30 km or so from Detroit MI. I would guess that spring here is about 7 to 10 days ahead of us. The warmer climate is excellent for growing vegetables, fruit and flowers. 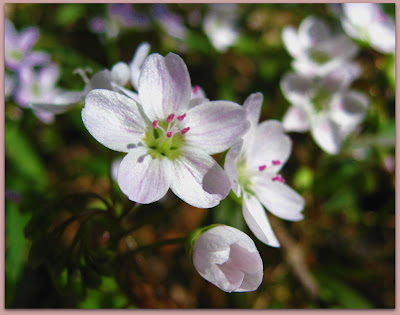 There are several parking lots in the park adjacent to various trails. Near the entrance is a large marsh and a 1 kilometer boardwalk. There are several beach trails and a homestead trail where farms once operated. Near the visitor's interpretive centre are some woodland trails and a trolley runs from here to the 42nd parallel on the southern point every 20 minutes. 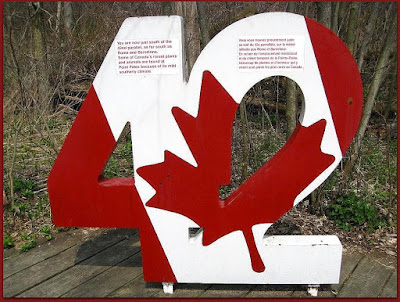 The point is a particularly interesting birding area during spring migration as thousands of birds land here after flying north across Lake Erie. The trees here were full of bird song and movement but it was also interesting to look in the ground to see what was growing upward. Early butterflies and other insects flew about and I saw my first snake of the season. 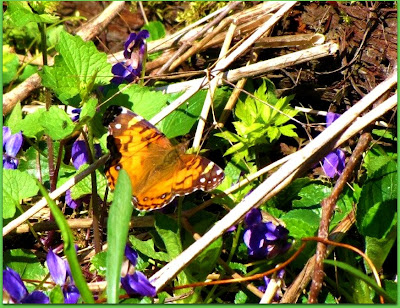 I finally had an opportunity to see the early spring flower known as Dutchman's Breeches. I have never seen any around our home and was happy to note they were the most abundant blooming plant in the park at the end of April. Other wildflowers seen included Spring Beauties, Mayapples and Violets. We only explored a fraction of the park and I am sure there were many other blooming plants in various habitats. I talked to a man who lived in the area and came here every day throughout the year. He and his wife purchase a seasonal pass to the park each winter and enjoy all seasons on the trails. Because it is flat and relatively small, it is an ideal place for seeing many things without an excessive amount of walking.

Did I mention I could live here?