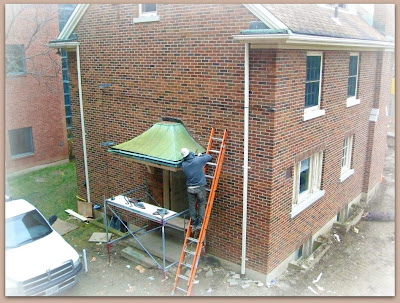 The old house on the hospital grounds is being prepared for demolition. A workman removes the brass portico which will be incorporated into the new wing that is to be built. The old house is perhaps 80 years old and was built to house sanatorium staff who used to live on the grounds. Antibiotics closed the TB sanatorium and some of the out buildings were neglected over the ensuing years. 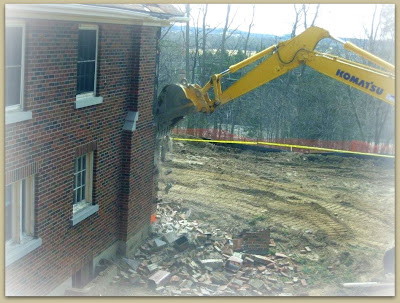 The young operator gently taps the bricks with the dinosaur head of his big machine. One brick falls, then two then three, and a whole row tumbles to the ground. The bricks will be stored in case one of the other old buildings needs repair. 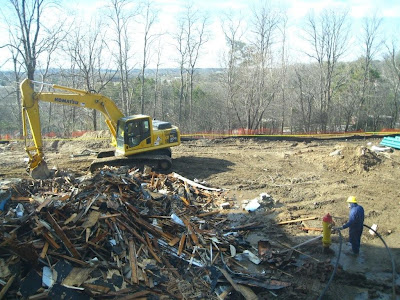 All materials to be recycled are removed and the frame is pushed to the ground. Water is sprayed on the building throughout the demolition to reduce dust that may enter the hospital ventilation system. The work must progress on schedule as the ground breaking ceremony for the new wing is planned for next week. 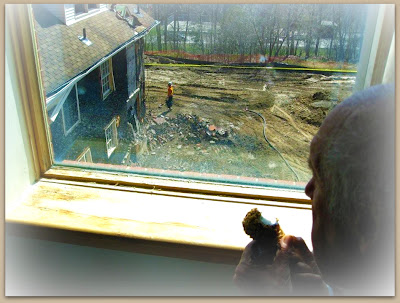 The old man watches from the window. He too was new 80 years ago. Life was good, then he lost his business, lost his wife, lost his child. We tell him he needs to live in a nursing home. What more can he lose?

He asks me to take him out for a smoke and we stop by the tuck shop for some ice cream on the way back to the ward. The doctor wants him to stop smoking but he resists strongly. What difference will it make now?

We sit together in silence and watch the house come down.