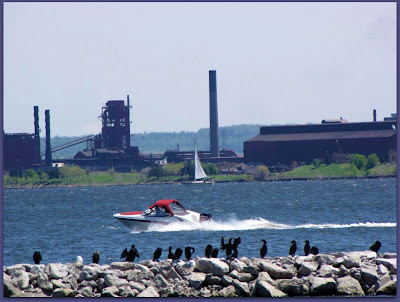 Travelling the major highway connecting Toronto and Niagara Falls Ontario you must pass a large "bird slum" along Burlington Bay. The off ramp just before the Burlington Skyway leads to a road along the docks and industrial basin of the city of Hamilton. It is home to thousands of community dwelling birds. Two weeks ago they were tending nests in their crowded tenement and no young birds were visible. I am sure this has changed by now. 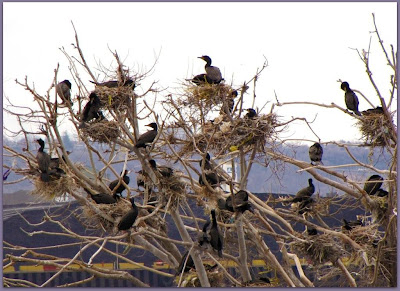 Double Crested Cormorants are gaining a reputation with some as a nuisance bird. (I wrote about them in this post a year ago) Their looks, habits and smell do not endear them to most people but they are a native bird and have made a comeback in numbers after suffering from the effects of DDT. They nest in trees in large colonies and the nests incorporate all types of materials, from twigs to plastic and garbage collected along the shoreline. 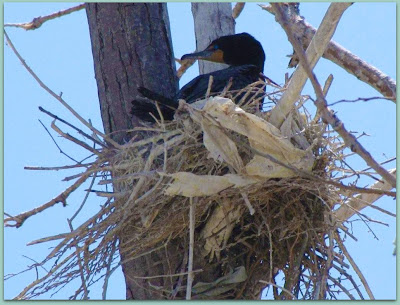 We pulled to the shoulder of the road and rolled down the window to take these pictures. The stench of dead fish was very strong even from the vehicle. There are hundreds, perhaps thousands of Cormorant nests along this stretch of road. 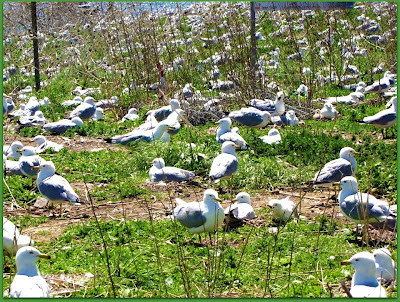 Beneath the Cormorant nests were thousands of Ring-billed Gulls. My bird guide calls them "colonial, nesting in a shallow scrape in the ground lined with plants and debris." Pairs of gulls tended nests that were crowded together along a narrow strip of land. There was plenty of noise and smell and it was hardly safe to venture outside the vehicle without an umbrella. The wind was strong and many birds hovered in one place above the nesting grounds. 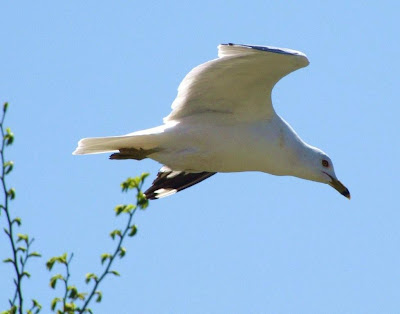 Many birders were out on this May weekend but we did not see anyone else visiting this area. The others were looking for pretty warblers, migrating songbirds and majestic birds of prey. These abundant, smelly "slumbirds" were best avoided. But they have their place and have adapted well to city environments. This area of the bay must have a plentiful food supply to support so many birds and that may speak well of efforts to improve the water quality in the industrial basin.
Posted by Ruth at 7:59 am