Sing a Song of Spring! 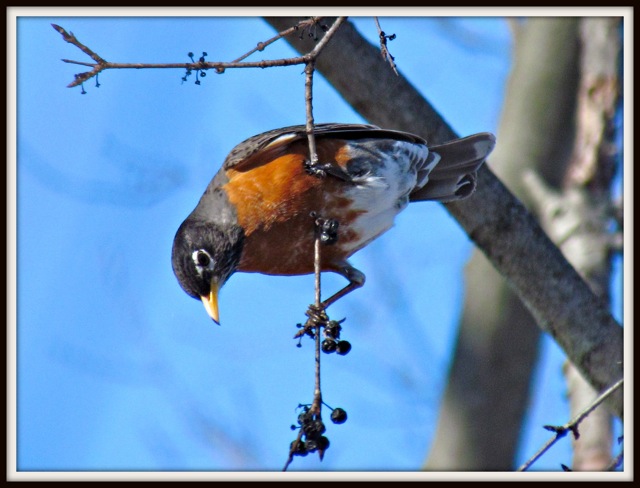 The sun shone bright and warm over the snow and ice yesterday. A cold north wind blew across open fields so I chose a sheltered trail near the river for an afternoon walk. I was greeted by robin songs as I got out of the car and followed the sound into a nearby bush. A tangle of berry bushes attracted the songsters. I threw some bird seed on the snow and stood still while I counted.

many friendly Chickadees and Nuthatches, a Brown Creeper, 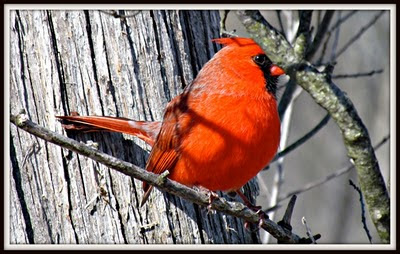 singing Cardinals, exuberant House Finches, 3 Downy and 1 Red-bellied Woodpecker,
Tree Sparrows, Juncos...all in one spot, singing the same song....
SPRING!
I count my first spring robins as the entrance to the spring season. Peterson Field Guides published this on their Facebook page yesterday.
"Though the American Robin has become widely recognized as a harbinger of spring, in southern Canada and most of the US the species resides year-round. Individuals usually gather in flocks during the winter months, feeding primarily on frozen berries and other fruit. Some of these flocks can be quite sizable, numbering in the hundreds of birds. Our perception of the robin's return in spring is oftentimes actually the disbanding of the winter flocks and return of individuals to their summer territories. The only fully migratory populations are those of the boreal and subarctic. Have your local birds come back yet?"

I know this flock of robins was likely one of the groups I saw locally in January, but their behaviour in March is very different than in mid-winter. Their migrating cousins will be hopping on our lawns in the next couple of weeks.

Email ThisBlogThis!Share to TwitterShare to FacebookShare to Pinterest
Labels: birds, seasons of life