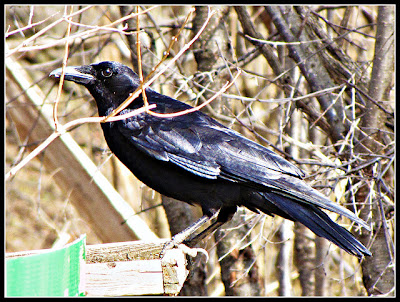 For two weekends in a row our weather experts have missed forecasting significant weather and we received unexpected snowfalls. Fail!

On Groundhog Day we were told we were going to be hit by the biggest winter storm in three years and many places closed in anticipation of the bad weather coming our way from the American midwest. It missed us.

This Saturday we planned to travel 100 km west to visit our daughter for the day. We were supposed to get a dusting of snow overnight but awoke to several fresh centimetres and gusty winds. I checked online satellite pictures which showed a narrow band of flurries coming toward our city from Lake Huron. The area around was clear and our daughter assured us it was sunny at her place. 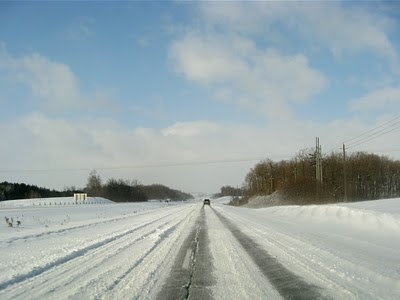 We set out on snow-covered roads and the divided four lane highway was only track bare. But visibility was good, the sky was clearing and traffic was light. As we continued west, the gusts of wind picked up and blew snow across the pavement but travel was still reasonably safe.

Half way to London, we came upon a large murder of crows. They lined the roadway, filled the trees and covered a parking lot. I have never seen so many crows in one place. And just as we passed them, the weather turned wickedly dangerous with heavy snow and wind. There was nowhere to stop, no place to turn around and had I stopped, the car would have been stuck. The Becka started the GPS unit to help us navigate and I followed hydro poles along the roadway. 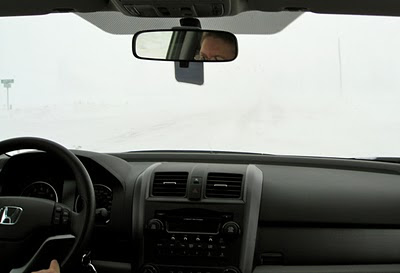 We didn't drive out of the snow streamer for over 30 km and I was very, very thankful for four wheel drive even though it drops my gas mileage in a big way. My family in the north of Mexico and in the UAE experience sudden sandstorms which are equally unexpected and dangerous.  Here, we have had so much snow this winter that snowbanks in the country are higher than most vehicles. Wind gusts decrease visibility at eye level even if it is not snowing. 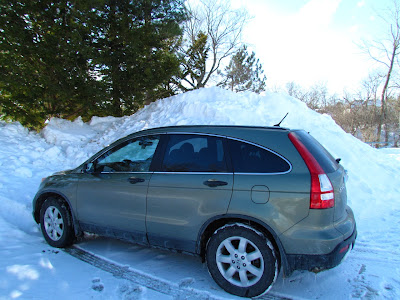 We finally reached our destination safely and the sun was shining brightly. My daughter and I walked along the Thames River at Greenway Park where the discharge from a water treatment plant keeps ice from forming. I didn't see a single crow, but there were Mergansers, Bufflehead, Goldeneye, Longtail, Black and Mallard Ducks on the river along with two Bald Eagles overhead. And did I mention Canada Geese? 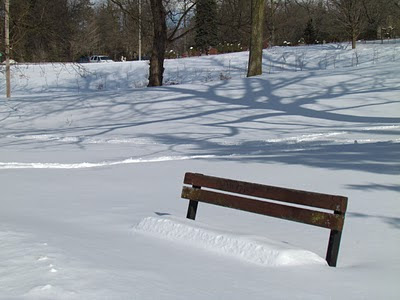 The trail was plowed but no one bothered to clear the park benches. I think we have had enough snow for a winter and no one will convince me that global warming is a reality around here. We brought our aging dog along and he was less than impressed with being sent outside to do his business in snow that was a deep as he is high. His look coming back to the house summed up my feelings concerning three and a half months of winter...with at least another month to go. 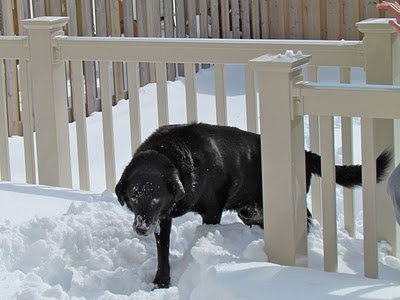 I continue to listen the weather forecasts with some scepticism, but if there is another murder of crows along the highway, I will seriously consider a U-turn or a full stop. Perhaps the weather forecasters need to get away from their computers and tracking systems once in a while and learn to talk crow rather than eat crow.
Posted by Ruth at 7:44 pm