Nancy lives a short distance from the Snow Bunting banding field. Her husband is also a bird bander and while she was busy in the van, her son called to say they had captured a Rough-legged Hawk. Rick encouraged us to leave the Buntings to him and we raced over to see the big bird. Rough-legged Hawks are yet another species which breed in the Arctic Tundra and are found here only in the winter months. I have seen many from a distance and find them to be a striking, easy to identify raptor, especially in flight. 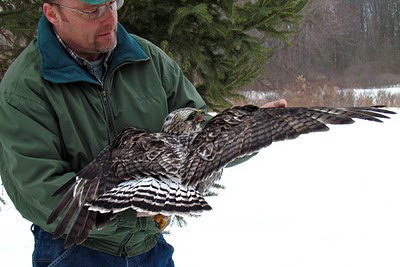 The bird was very calm and allowed Mike, who is an experienced handler,  to inspect it closely as he measured the wings and determined its age and sex. (male, greater than 2 years old). 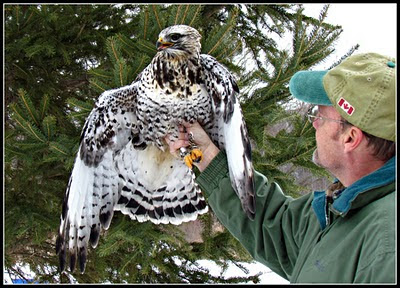 After a final round of photographs, the hawk was released and soared to a nearby tree where it rearranged its feathers before it took off again. It was certainly an unexpected bonus for the day!

I posted this video on YouTube with some of the stills and a movie clip I shot at the Snow Bunting field. The Rough-legged Hawk is not included in this less-than-two-minute presentation. I wish I could have anticipated and filmed the Merlin attacks but some things just have to be seen and remembered.