The cold weather and recent heavy snowfalls have made it difficult for raptors to hunt for prey. I have seen more hawks around feeders than usual lately and they are working very hard for each meal. A trap of captured birds in a field is going to attract some attention. The Ruthven banders have reported a good number of unwanted visitors as they band the small birds. When I arrived, a Merlin and an American Kestrel were watching the proceedings with great interest. The Merlin flew off its perch in quick pursuit many times after a bird was released from the van window. The Snow Buntings always avoided capture and the aerial chases were quite exciting. The banders were not trying to put the birds at risk and kept a close eye on the predators. I was able to get very close to the Merlin who was not at all interested in me and eyed me with some disdain. 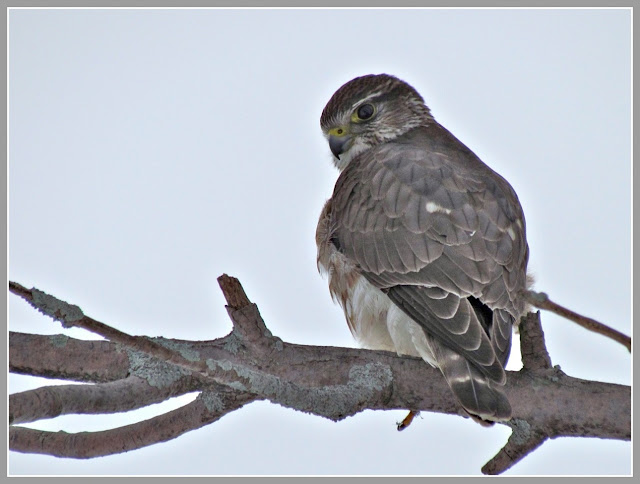 Horned Larks and Lapland Longspurs were also attracted to the ground traps. The larks were very cautious and were rarely captured even though good numbers of them were around. Lapland Longspurs were a new life bird for me and it is doubtful I would have spotted them in a flock of buntings without assistance. I had to opportunity to release one of them.

I wish I had taken an picture of the extended rear claw for which it is named. This is another bird of the Arctic tundra but it is seen less commonly in our area in the winter even though it is not a species at risk. The picture below shows at least two Lapland Longspurs in a flock of Snow Buntings and it was not until after I downloaded the picture that I noticed them. 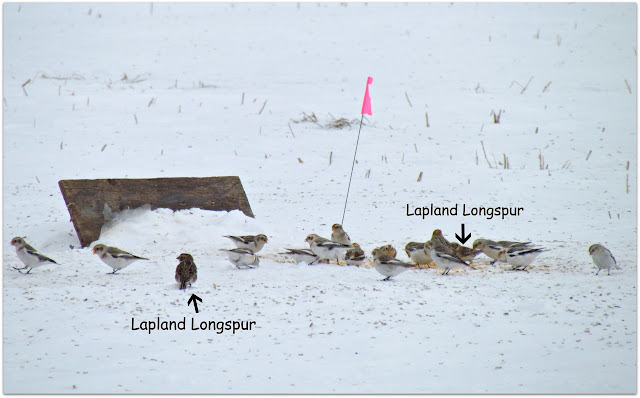 The picture below shows a Horned Lark between two buntings. They are much easier to pick out in a crowd. All the birds were quite vocal and their chirping and calling made pleasant listening. 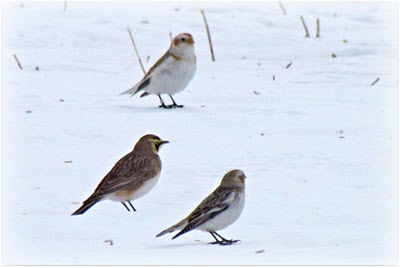 Birds seen in the immediate vicinity of the banding operation:- 9 species of note