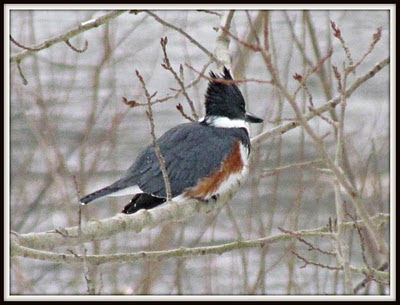 The last two birds of my January 2011 count were found near a water treatment plant where warm water is discharged into the Grand River. It is one of the few spots left with open water after the recent deep freeze. This is my second year finding a Belted Kingfisher in January. 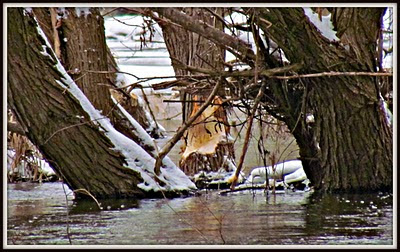 Beavers have been working the area too and have undertaken the felling of a large willow in the floodplain. 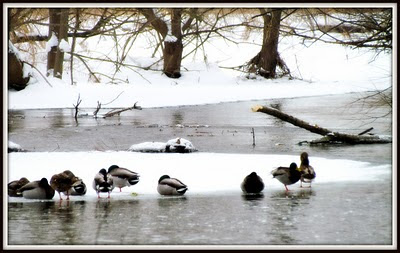 The usual crowd of ducks and geese, including Common Mergansers rested on the ice or paddled around in the shallow water. A juvenile Bald Eagle soared overhead. I have seen several eagles in various locations this year. 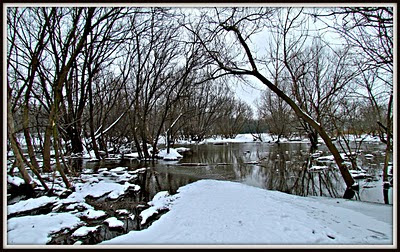 The trail was flooded and as I watched from the edge of the temporary lagoon, a Great Blue Heron flew in and landed in the trees in the middle of this picture. It huddled on a branch, its head tucked in from the cold, likely wishing it had joined others of its kind in flying to Florida for the season. It was my first January Great Blue Heron.

So my total number of species for January 2011 was 52, down from 56 last year and 61 the year before. But I saw five new January species and two of them were life birds. (The Varied Thrush was actually first seen in December 2010). Each winter is different and the birds pick and choose places most favourable for food. In the past three years I have counted 75 different January species within an hour of our home. Here is this year's list:

*First January sighting
Other birders I know who participated in the January count are Kathie of Kathie's Birds and Larry of The Brownstone Birding Blog.
Posted by Ruth at 7:35 pm