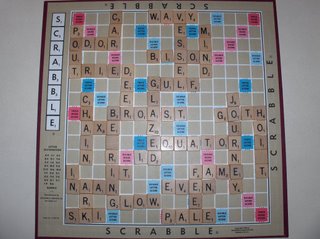 SCRABBLE
Grandma loved a game of Scrabble after dinner. I could never beat her. She had a well thumbed Scrabble dictionary that she had memorized. The only time she needed it was to prove to me that her play was really a word.
I have installed Scrabble on my computer, but it is not the same as a game played on the kitchen table. 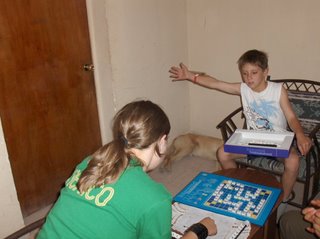 We played an interesting game of Scrabble in Mexico with my 11 year old sobrino. The game had Spanish letter tiles, and we played in SpanFrenglish. Sobrino cleaned up with high scores as he was far more multi-lingual than we were….and very liberal with the rules!

The other picture above shows a game well played on the kitchen table in Canada…. English only.
Posted by Ruth at 7:02 am