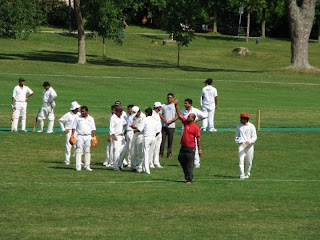 We are coming to the time of year when baseball, hockey, and football seasons overlap. I have become very disenchanted with professional sports due to the exorbitant salaries paid and immature behaviour of some of the players. I refuse to support major leagues at all with the purchase of tickets or licenced merchandise. Even the Olympic Games have become less appealing due to drug scandals and the participation of professional players.

Sports can be great social activities and while I do not have a competitive nature, I do enjoy watching people play a game for the joy of it. 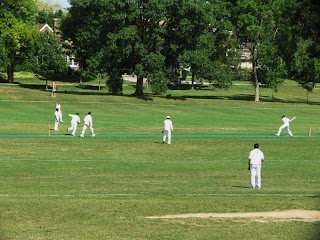 At a local park, a group of East Asian men frequently play a friendly game of cricket. Their families gather under the trees to watch, and may host a barbeque and picnic afterwards. Both teams wear crisp white outfits as cricket players do all over the world. This game is popular in many parts of the old British Commonwealth and some of our larger Canadian cities now have organized community leagues.

Soccer was gaining in popularity in North America even before David Beckham crossed the ocean this year. 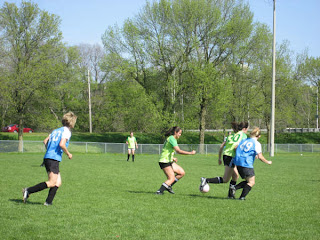 Hospital Ladies' Soccer Team
I prefer watching soccer over our football as the players are in better physical condition and appear more skilled to me. There are adult recreational leagues as well as numerous youth leagues in our city. Soccer is hugely popular in Mexico and informal games are played in the cooler air after dark in my brother's large yard. Boys and girls of any age are welcomed.

As children, we played baseball in the school yard after supper in the spring and summer. In the winter, road hockey was played by the hour by boys in the neighbourhood. I seldom see games like this any more as most children are now involved in organized activities or stay inside with their video games. 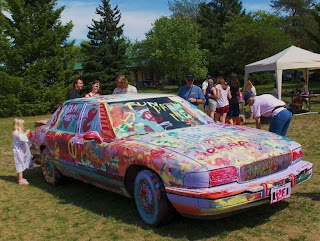 I am a terrible team player because I lack the drive to be a winner. I tend to cheer for the underdog and would try to help the other team if they were losing badly. Activities like biking and walking are my choice for physical exercise. Last month we saw this old car in the park. Paint was available for those who wanted to beautify the body of the vehicle.

No competition...this team activity was a winner!