The dog who couldn't swim 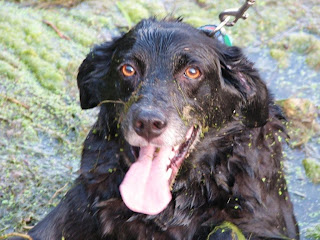 Laura wrote yesterday about teaching her new puppy, Luka to swim. It put me in mind of an incident with our dog last month that surprised me greatly.

We walk along the Grand River several times a week and our dog loves to walk in the water. The river in our area is shallow and the banks we walk along have gentle slopes. Near the hospital are a couple of docks used by the local rowing club for launching their boats. One evening, Becka and I were standing at the end of a dock with Dakota when he decided to jump into about three feet of water. When he surfaced, he was in a panic and immobilized with fear. Thankfully, his leash was on and we could keep his head above water. I could not believe our dog was unable to swim back to shore. He managed to get his front paws onto the dock and Becka lifted all 65 pounds of him out of the water. The flow of the river was slowed by the docks and the surface was covered with algae, scum and weeds. Dakota was a disgusting, smelly mess and needed a good bath once we got home.
I assumed all animals instinctively knew how to swim. Don't all dogs do the dog-paddle? Dakota is a lab cross, a breed that should be good at swimming. Our local news featured a story recently about pet drownings and reported that many animals die each year in family pools. 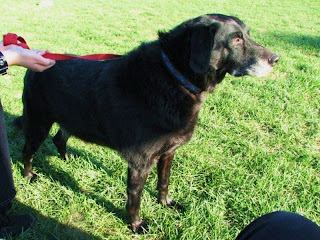 Dakota watching our daughter play soccer
Dakota still enjoys walking in the river, but we will have to watch that he does not get in over his head. He turned nine years old this month and is likely too old to learn new tricks.

On a different note....Ragweed season is drawing to a close here. Pollen counts are low again, but a short time ago, they were extremely high. The Weather Network was reporting pollen counts between 120 to 130 for our area a couple of weeks ago. Any count over 80 is considered to be high. I had written about Becka's allergy diet, and she stuck with it until last weekend. She had only two bad days that required use of an antihistamine. After she lifted Dakota out of the water, she had an attack. The water was covered with pollen and she experienced burning skin as well as respiratory symptoms. We are not sure what triggered the other bad day. The dietary restrictions did make a significant difference for her but she is happy to be eating wheat and dairy products in moderation again.
Posted by Ruth at 7:01 am