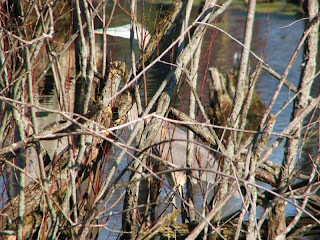 Most of the leaves have now fallen from our trees and bushes and the grasses at the edges of the trails have started to decay. It is easier to see little birds in the brush, although getting a picture amidst the jumble can be a challenge with an auto focus camera. I have been startled by a few birds at very close range as they have blended in with the leafless vegetation very well.
What do you see in the first picture? 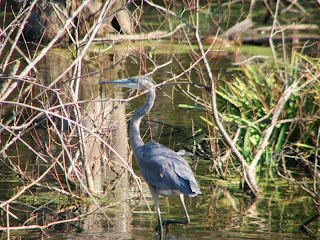 I saw nothing until it moved in response to my approach. This is likely one of the last Great Blue Herons around this year. This lone straggler at the swamp was still around last week.

On a noon hour walk below the hospital grounds, I looked up in a tree by the river and noticed some eyes peering down at me. I took the picture below with my little pocket point and click camera and the Red-tailed Hawk still appears close. The bird was barely noticeable in the bare tree as it sat there without moving. 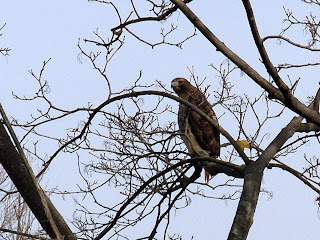 A couple of days later I saw another Red-tailed hawk sitting on top of a dead tree in the river's flood plain. Once again, I nearly walked by as from the back, the hawk looked like an extension of the stump. I have seen many hawks this month. I don't know if that is because they are migrating or if they are just more visible at this time of year. 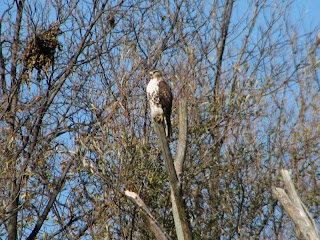 The gulls have their winter plumage now with speckled heads, necks and chests. This one was resting on a fallen branch in the lake. I thought I may have found a Thayer's Gull but on closer inspection found it to be a winter Herring Gull. The Thayer's gull would have a brown eye instead of the yellow eye and the head would be more rounded. (like Hercule Poirot!) 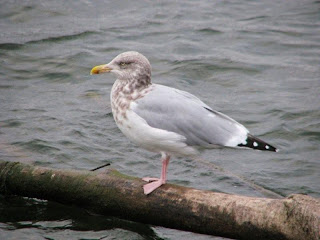 I have made a list of birds that winter in Southern Ontario and will be checking the bare trees and shrubs closely on my winter walks. Perhaps I will even find an owl peering from its perch...I wish!
Posted by Ruth at 12:00 am