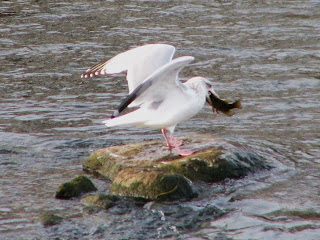 I took a very chilly walk along the river early in the morning this weekend. At the confluence of the Grand and Speed Rivers, the water was full of ducks, geese and gulls. Our over-wintering birds have arrived from the north and the sections of the river that stay open due to strong currents attract large number of birds. The temperature was -10C which is cold for this time of year. I watched this gull for some time as it tried to deal with a fish that was a little too big to handle. The gull was fishing from an ice-covered rock that was surrounded by shallow water. 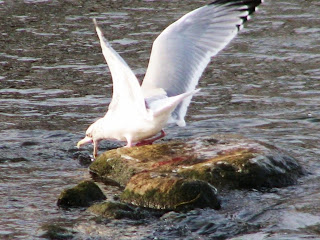 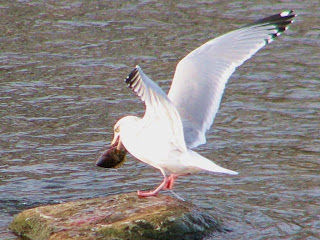 If only the gull could have heard my advice! "Fly over to the river bank and have your breakfast on the shore where the grasses and ground would make a eating surface." Another birder was watching the river too and said the birds would stay as long as the food supply remained good and the water stayed open. The river is still very low for this time of year. Time will tell if nature will be kind to the winter residents that rely on its delicate balance to survive.
Posted by Ruth at 1:01 pm