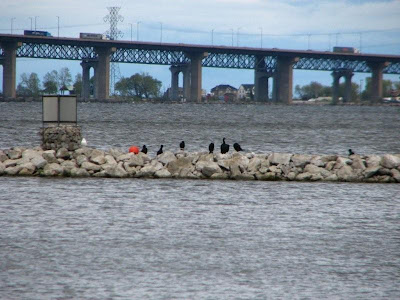 If the Trumpeter Swan is a white angel water bird, the Double-crested Cormorant has become the black demon of the Great Lakes. Both birds were present in Burlington Bay and they mingled together near the shoreline. I have watched large numbers of Cormorants on Lake Manitou on Manitoulin Island as they group together on rocky shoals and then take off into the air in a long line. I counted 100 birds flying up from the water together one afternoon last summer. 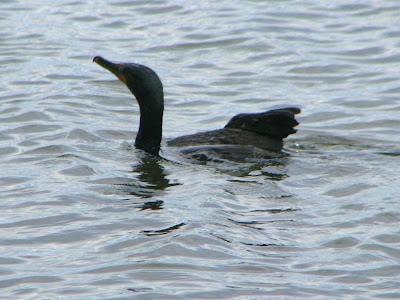 Fishermen on the Great Lakes dislike these birds for their perceived impact on commercial and sports fishing, especially since their numbers have increased dramatically in the past decade or two. Their population was almost wiped out in the middle of the last century due to the effect of DDT on their eggs, just as the Bald Eagle and Peregrine Falcon populations were affected. 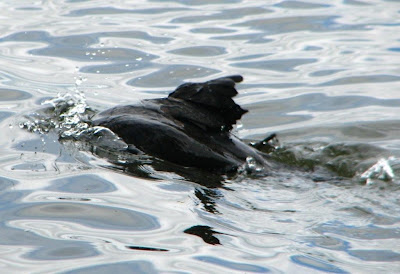 As the Great Lakes have been cleaned up these birds have increased greatly in number. The details of their decline and resurgence is described on this Environment Canada web page. I had a very close view of a Cormorant as it dove and fished close to the shore of Burlington Bay. 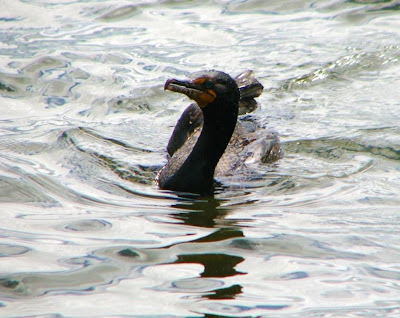 At times I have confused them with Loons from a distance because they sit low in the water. Like Loons, they dive for fish and may come out of the water many metres from the spot they went underwater. 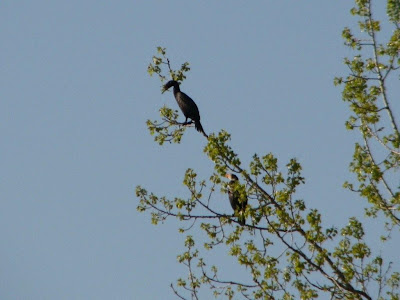 Cormorants at Columbia Lake, Waterloo ON

Cormorants are also present in ponds and rivers in our region. There is a small "lake" by our local university that is really a reservoir for a creek. It is a great area for birding and when I went there early in the morning last week, several Cormorants were perched in the trees. 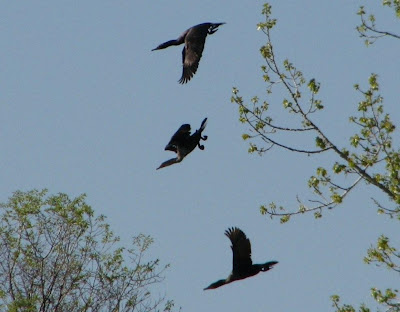 I still find it odd to see water birds high in the trees whether they are Wood Ducks, Great Blue Herons or Double-crested Cormorants. Three of them flew off as I watched and they landed in the water to begin their day of feeding. Perhaps Cormorants are in the same class as Canada Geese and Brown-headed Cowbirds, birds with appearances and habits that are not particularly endearing, but interesting nevertheless.
Posted by Ruth at 6:33 am