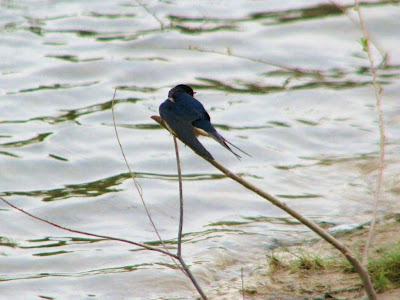 Barn Swallow
Mosquito season has not yet arrived but there are many flying insects on the surfaces of local ponds, swamps and rivers. There seems to be an abundance of swallows around this year compared to last year and I have finally been able to identify every Ontario swallow except the Purple Martin. It can be a challenge to focus on these swift flying, acrobatic birds with the binoculars long enough to see what they are. I have noticed they eventually do stop for brief rests when foraging for food. 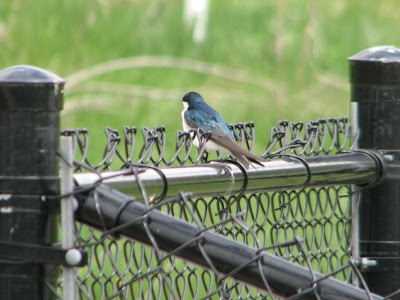 The Tree Swallow is the easiest for me to find perched somewhere as there are many bird houses placed along the river for them. They are our earliest arriving swallow in the spring. 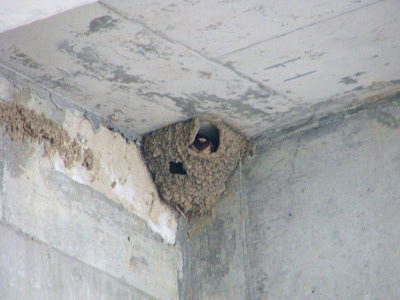 I have been looking under the bridge near the hospital for the Cliff Swallows that have a nesting colony there. House Sparrows had squatted in some of the mud nests in early April but in the past two weeks, the swallows have returned. I hoped to see them repairing their homes with new mud but have not been able to see where they land and have never seen them perched outside the nest. This nest is in definite need of repair but the Cliff Swallow does not seem to be bothered by the hole in the floor. 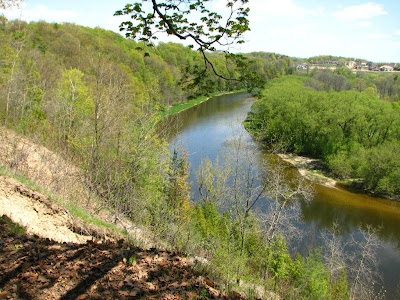 I recently hiked this lovely trail high above the river where sandy bluffs allow a great view of the treetops below. I noticed some swallows swooping back and forth near the bank and on closer inspection found the nests of some Bank Swallows. 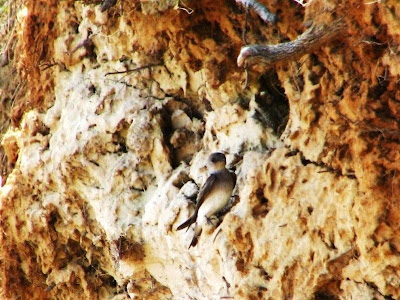 I never would have seen this bird near its nest unless I had watched it fly in with its mate. It is very well camouflaged! Apparently their nests are at the end of a sand tunnel. There were several nesting pairs in this little area. 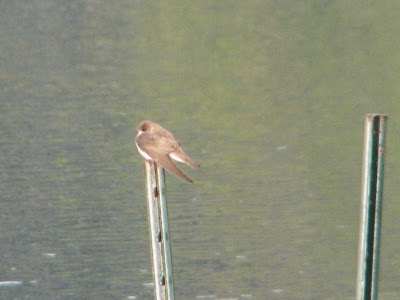 Northern Rough-winged Swallow
I had never identified a Rough-winged swallow until this spring. They are similar in colour to the Bank Swallow but lack the dark neck band. They hold their wings at a different angle when in flight. They are very active and difficult to find sitting still but will swoop within a couple of feet of your face. I did manage to get the shot above shot near a city pond. A trio of Rough-winged Swallows perched on the grate across the aquaduct that was under the pathway at the same pond. 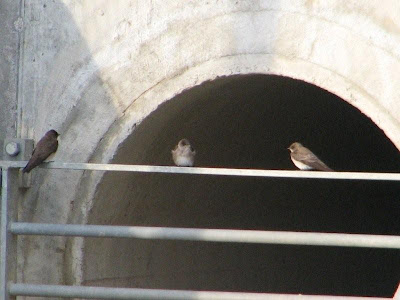 Rough-winged Swallows- back, side and front...

Now I have to find a Purple Martin colony like Monarch wrote about in a recent post. My husband works in the country and I asked him to inquire if any neighbours or customers have an occupied Martin house.

Mosquitoes will be buzzing around any day now and if there are more swallows around than usual this year, they are most welcome to stay and gorge themselves on the pests. I never get tired of watching their graceful flight over the water with spins, turns and dives.
Posted by Ruth at 5:39 pm