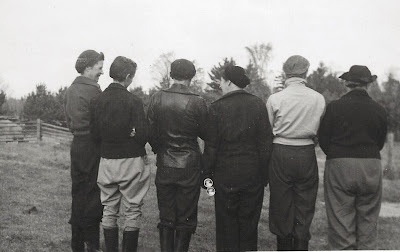 Moving forward. Grandma is third from the right.
It is Election Day, the 40th federal election since Canada's Confederation in 1867. The election was called by Prime Minister Stephen Harper a few weeks ago as he felt it was a good time to try for a Conservative majority government. The campaign has been boring and attack ads have been the main strategy used to sway voter opinion, an approach I personally find very distasteful. The financial crisis has garnered more media attention than the election and it will be interesting to see if this unexpected twist will hurt the Conservatives in the end.

It would be very easy to skip the polling station today...

...but a woman's right to vote was a hard fought campaign in many democratic countries. Grandma Devins was born in 1896 and graduated as a medical doctor from the University of Toronto in 1918. She retired in 1960 and was a great influence in my life until her death in 1990. When I was young I did not realize how exceptional she was as a woman of her time. 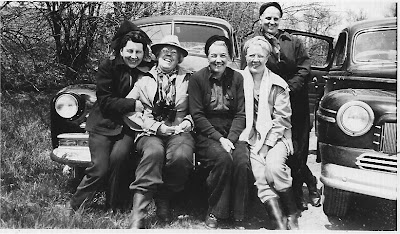 Women were granted the right to vote in federal elections for the first time on May 24, 1918, just when Grandma would have graduated from University. The following information on women's history in Canada is found at this government website.

"Before the 20th century, women who owned land were occasionally allowed to vote. In 1849, all Canadian women, regardless of race, religion or property rights, were banned from voting in all elections. Beginning in the 1860s, wanting a say in the moral and social welfare of their communities, women began to unite for this common goal. This surge of activism was the beginning of the women's suffrage movement. Suffragists were relentless campaigners, lecturers, demonstrators and petitioners. They bravely faced politicians' ire and the aggressive opposition of public opinion. By 1918, some women were granted the right to vote and to have a say in the political future of Canada. For many other women, their race, ethnicity and religion still barred them from the vote and, for them, the fight continued for almost 50 years. It wasn't until the introduction of the Universal Right to Vote in 1963 and the addition of the equality clause in the Canadian Charter of Rights and Freedoms in 1985 that the right to vote could not be denied on the basis of race, national or ethnic origin, colour, religion, age, mental or physical disability, or gender." 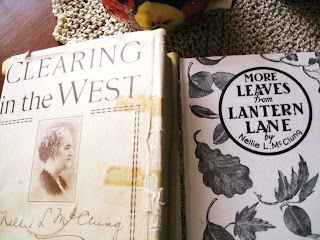 I have many books from Grandma's library including two by Nellie McClung. The following quote comes from a website about this tireless worker for women's rights in Canada .

"Nellie McClung was one of the most important leaders of Canada's first wave of feminism, and she is still remembered for her role in the famous "Person's Case" which saw Canadian women declared persons in 1929."

Today she would have been a blogger. Her book "More Leaves from Lantern Lane" reads like a blog as she comments in short chapters on her life and goals. She published several books, a few of which are still in print.

I will vote today, for Grandma, for Nellie, and for all the women who fought hard in a democratic way to ensure the rights of women in this country.
Posted by Ruth at 9:16 am