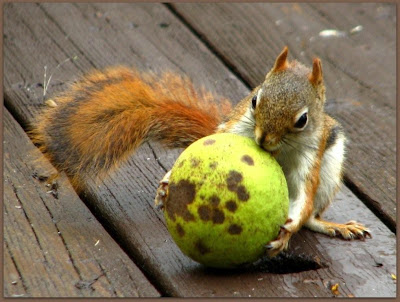 I collected a bag of black walnuts from the hospital grounds this week. Unlike Nina, who actually works to break open these almost inpenetratable nuts, I put them out as October "trick or treats" on my back deck. Each day I would place one on the picnic table and watch for a taker. There was never any visible action, but within two minutes of my leaving the doorway, the walnut would be gone. What could whisk them away so quickly? 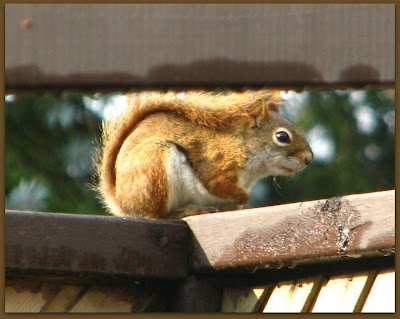 This morning started out dull and rainy but I put two walnuts in the table and stood back from the door with my camera pointed out the window. We have a red squirrel who lives under a neglected woodpile in the yard behind our deck. It scampered up the privacy fence and waited for an opportunity to move. This squirrel is usually not afraid to approach me when I am out, but he was far more cautious today. The next events happened quickly and my pictures are blurry because of the speed of the squirrel and the poor light. 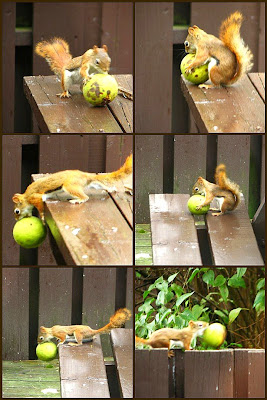 The 225 gram American red squirrel approached the 150 gram walnut and moved it to the edge of the table. It strained as it held the fruit between its teeth and dropped it on the bench. This action was repeated from the bench to the deck floor. It then climbed the fence holding the fresh walnut in its mouth and took it to the nest. This was a Herculean effort for a small rodent and it was more vulnerable to predators during the exercise. We have had a Coopers Hawk as well as a Red-tailed Hawk near the yard recently.

I put the rest of the walnuts in a safer and more convenient location for the hard-working squirrel. We have much larger black and grey squirrels in the neighbourhood too but they are more interested in food that is easier to obtain. (like the bird feeders!) The little red squirrel has a LOT more work to do before it actually can eat the walnut. But he has all winter for that.