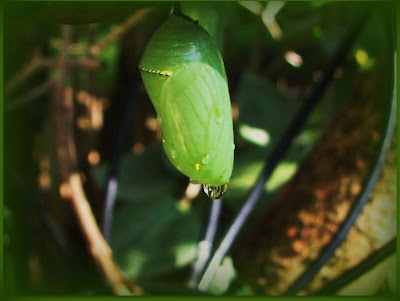 Monarch Chrysalis -Day 7
The wings of the developing butterfly are clearly seen through the green chrysalis as it enters its second week in this stage. By next week a new butterfly should be feeding on nectar and beginning its flight south for the winter. The inborn knowledge of this simple creature is astounding. Three developing butterflies hang from a screen in the shelter of a lilac tree that grows near our deck. Two remaining caterpillars have been protected in a container from the rains that have drenched our area as the remnants of the last two hurricanes have passed through. 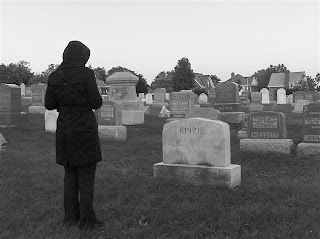 In a graveyard near our home, four of my husband's father's siblings are buried, all of them deceased in their first year. In that family four of eight children survived to adulthood. His father, the youngest in the family was born in August 1918 just weeks before the great influenza pandemic swept the continent. Many people young and old died in this community. Medical knowledge, the development of drugs, and life saving interventions have decreased infant mortality and increased life expectancies dramatically. Flu vaccines keep the frail elderly alive in our nursing homes long past the time nature would have taken its course. My doctor Grandma always told me pneumonia was an old person's friend. I thought that was an awful thing to say, but now know what she meant. Babies born with congenital conditions incompatible with life are sustained with artificial feedings. It is no longer just "survival of the fittest". We are seldom confronted with the natural cycles of life and death and survival, especially as our society has moved largely from rural to urban centres. 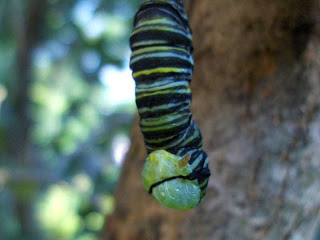 Two of our five caterpillars will not become butterflies. This is a 40% failure rate on nature's part. One of the caterpillars was exceptionally small and instead of attaching only its tail end to the leaf with silk, attached the entire side of its body. It was unable to hang upside down and shrivelled up. Today, I watched as our last caterpillar started to shed its skin. But the process was not completed. One band did not split and it could not free itself of the outer covering. I tried to help gently with a pair of tweezers but could not save it.

These are nature's odds. They are compounded by man made risks. Driving on the highway yesterday, a Monarch butterfly crashed into my windshield and did not survive the blow. Our newspaper featured a recent report about this year's decline in Monarch populations, mainly due to pesticide use and loss of habitat. 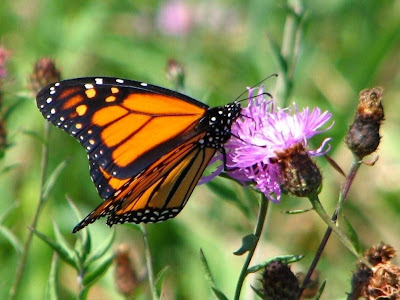 I visited a natural area an hour west of home yesterday and saw many varieties of butterflies including Monarchs feeding among the wildflowers. Some will survive and reproduce successfully ensuring a new generation. Nature's balance is fragile but the odds are not impossible. But human alteration of the environment has brought more than one species to extinction. We have the knowledge and resources to protect and extend human life. We also understand the impact of our actions on the environment but the economic will to change is not always present.