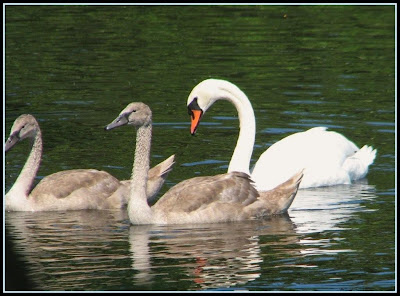 Mute Swans are a common sight in urban parks and their graceful beauty is admired. I have witnessed an altercation between a swan and a Canada Goose and the goose was not a winner. The swan was not mute but could only hiss and grunt. This species does lack a distinctive call and there is an old legend that before death the Mute Swan sings a beautiful song.
Here is an excerpt of Alfred Tennyson's poem, The Dying Swan...

The wild swan's death-hymn took the soul
Of that waste place with joy
Hidden in sorrow: at first to the ear
The warble was low, and full and clear; ...
But anon her awful jubilant voice,
With a music strange and manifold,
Flow’d forth on a carol free and bold;
As when a mighty people rejoice
With shawms, and with cymbals, and harps of gold... 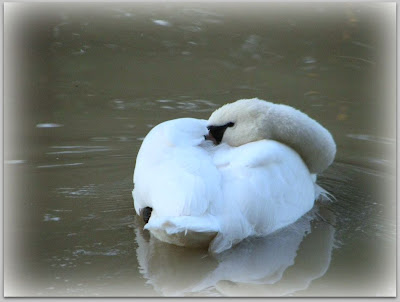 The term 'Swan Song' has also come to represent a final glorious work of a performer or composer before their retirement or death.

None of the Mute Swans pictured here were singing or dying. The resting swan swam around with its head tucked in its wing, raising its head only when it needed to change direction. The cygnets were almost as large as the adult swans but lacked the white feathers and orange bill. 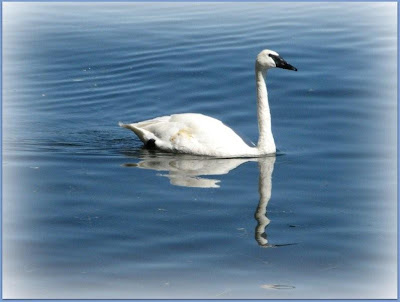 Year old Trumpeter Swans have stayed over the summer at Burlington Bay in Lake Ontario. Most of the flock flew north for the breeding season but will be returning soon. These swans are not mute and sound to me like a car horn when they honk. Their erect necks, black bills and call make them easy to identify amongst the Mute Swans in the harbour.

Thanks to Donna and Mare for recommending E. B. White's book, "The Trumpet of the Swan". I borrowed it this weekend and found it to be delightful!
Posted by Ruth at 8:26 pm