A Visit to Ground Zero 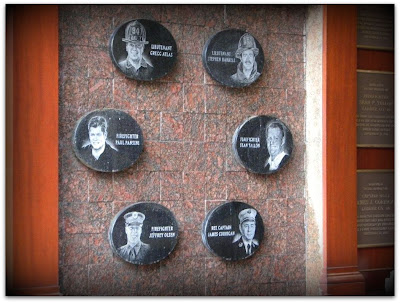 I remember many little details of the morning of September 11, 2001. At my 9:00 AM home care visit the TV was on and we watched the fire from the impact of the first airplane crash into the World Trade Centre. At the next home visit I saw the second plane hit the tower. I remember the patient, the address, the weather, and other details that would normally be lost after seven years. I postponed my next visit and rushed home to try and grasp what was happening.

I avoided much of the TV coverage in subsequent days due to the horror of the images that were played over and over again. I haven't necessarily agreed with the wars and American policies that have followed as a consequence of this event. I don't watch the memorial services or listen to the roll call of names that is read each year on this date. But I do think of the personal loss of life and the bravery of many who died that day. 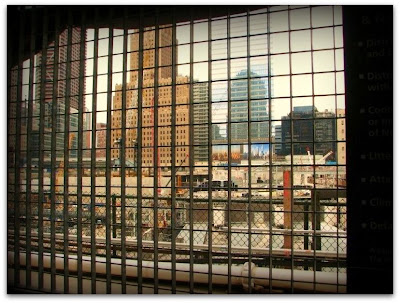 We visited Ground Zero this June during our trip to New York City. The mood was sombre and people were silent as they looked through the fenced off area. I was surprised at how narrow the streets seemed and the number of nearby buildings still scorched with fire. It was impossible to imagine the bedlam that would have been present in the financial district of the city on that fateful day. We stopped at the nearby fire station, Ladder Co. 10 and viewed the memorial and pictures of the men from this location who died trying to rescue others. 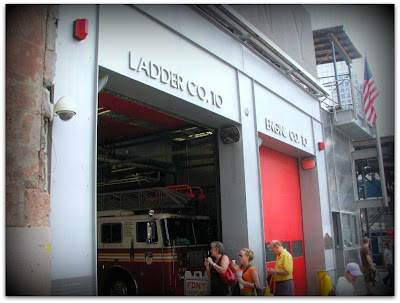 One morning I walked along 10th Avenue behind a group of uniformed NYFD firemen. I was impressed with the open respect shown to them from people passing by. I sensed a respect for policemen as well that is not usually seen in big cities. New York City was changed by the 9/11 attack but emerged with pride and resilience.

As a Canadian I give tribute to those affected personally by this tragedy and pray for peace and the end of conflicts that have arisen in its wake.
Posted by Ruth at 7:34 pm